Michael Ferris from Rattoo, Ballyduff, is charged with murder of Anthony O’Mahony 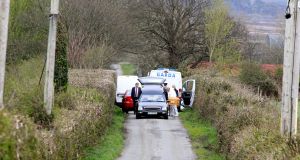 Garda at the scene of a fatal collision in Rattoo, Ballyduff, Co Kerry. Photograph: Domnick Walsh 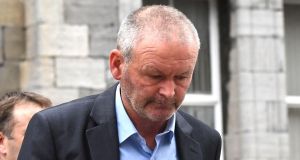 A 62-year-old Kerry farmer has appeared before Tralee District Court charged with the murder of a neighbouring landowner.

Det Sgt Heaslip gave evidence of formal arrest charge and caution, saying that at 11.55 pm on April 4th he arrested Mr Ferris, and later charged him on directions of the DPP.

Cautioned, he made no reply to the charge, the detective said.

Mr Ferris’ solicitor, Risteard Pierse, said he had no questions on the procedure.

“My client understands he is to be remanded in custody”, the solicitor said.

“My client will be making an application for bail in the High Court, ” Mr Pierse said.

The solicitor also said he would be making a recommendation his client receive all necessary medical treatment while in custody.

Judge James O’Connor asked Mr Pierse to elaborate, asking what was wrong with his client. The solicitor said he did not want to go into it at that point .

However, he had already spoken to the doctor on Tuesday expressing concerns about his client’s mental state.