Councillor says he cannot pay woman he drove over 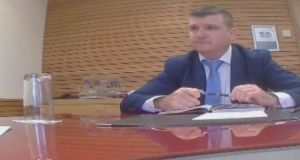 Cllr John O’Donnell from Donegal filmed in a meeting with an undercover RTÉ reporter. Photograph: RTÉ

A Donegal county councillor has told a court he is facing bankruptcy as a result of failed business dealings and does not have money to pay compensation to a woman he drove over 16 years ago.

Independent Cllr John O’Donnell was at the centre of controversy last December when he featured on an RTÉ Investigates programme in which he appeared to ask for cash for political favours. He has denied the allegations.

At Letterkenny District Civil Court on Wednesday he admitted having millions of euro of debts. He said he had judgements against him from ACC Bank and AIB. He had personal guarantees of €1 million to each bank.

Petra Kucklick, a German native from Mill Cottage, Rooskey, Creeslough, is suing Mr O’Donnell from Larganreagh, Downings, for an outstanding €33,000 debt from a personal injury claim.

Ms Kucklick’s barrister Laura O’Reilly said Ms Kucklick had been awarded personal injury compensation in 2008 and Mr O’Donnell had failed to pay the award. The court heard the councillor had paid €7,600 in 2009 but then stopped making any payments despite a court order.

The 2008 judgement related to an incident in 2000 in which Mr O’Donnell had driven over the foot of Ms Kucklick at a building site.

Judge Paul Kelly told Cllr O’Donnell to take the stand where he was cross-examined on all his financial dealings.

In his evidence Cllr O’Donnell said a plot of land at Horn Head, Dunfanaghy, had been re-possessed, as had a property investment with his brother in Kilmacrennan.

He said he didn’t own a lorry used in a St Patrick’s Day parade; the lorry was hired. Also, he said he didn’t currently own a car but had been given a Volvo V40 free by Letterkenny-based McGinley Motors. “He gave it to me as a goodwill gesture until I can buy one”.

Mr O’Donnell stated he didn’t have any salary from his wool exporting business, other than the use of a company BMW X5, and a 2011 trip to China was paid for by the wool company.

In addition he said donations made to Termon Ladies gaelic team, Milford GAA club and Kilmacrennan Celtic had come from either a council fund or limited companies and not him personally.

He said he did not own the Millbridge Inn in Kilmacrennan and didn’t hold the liquor license for it. He was managing it free of charge or salary for family friends.

He is surviving on €16,000-a-year county council salary plus expenses.

Ms O’Reilly put it to Cllr O’Donnell he had paid “scant” regard to the court orders against him in this case.

“I genuinely didn’t have the money to pay anything,” said the councillor.

Judge Kelly described the Millbridge Inn situation as “shadowy to say the least”. He said the councillor had provided only a sketchy outline of all his business dealings and earnings.

Earlier Cllr O’Donnell’s solicitor Kevin McElhinney told Judge Kelly his client had “significant debts” and was now engaging in the insolvency process and had put a number of proposals to his creditors.

Mr McElhinney said he would apply for bankruptcy if Ms Kucklick was unwilling to be part of the insolvency plan.

Ms O’Reilly said the complainant wished to continue with the legal process, saying that whilst Ms Kucklick would be a preferential creditor, a veto from another creditor would stop the process.

Judge Kelly adjourned the case until March 2nd when Cllr O’Donnell must provide an up-to-date statement of means and all bank records north and south of the Border.