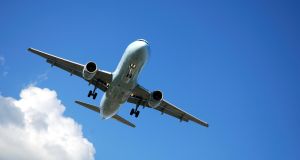 A woman has been fined €1,500 by a Cork court over an air rage incident. Photograph: iStock

A British woman (33) has been fined €1,500 by a Cork court over an air rage incident on a flight from the Canary Islands to the UK.

The woman became so abusive towards cabin crew that the pilot was forced to divert to Cork because he feared for the safety of everyone on board.

Gemma Campbell from Elston Road in Manchester, England was arrested by gardaí after Jet2 Flight LS910 from Fuertaventura in the Canary Islands to Manchester was forced to divert to Cork Airport on December 27th.

On Monday, at a special sitting of Cork District Court, Garda Gearoid Whelton told how he arrested Campbell after the plane, with more than 100 passengers on board, landed at Cork Airport. He brought her to Togher Garda station where he charged her with two offences arising out of the incident.

Campbell was charged with being intoxicated to such an extent on board Flight LS910 as to give rise to fears that she might endanger herself or other persons on board the flight, contrary to Section 2A (1) and Section 2A (4) of the Air Navigation and Transport Act 1973.

She also was charged with engaging in threatening, abusive or insulting behaviour on board Flight LS910 with intent to cause or being reckless to causing a breach of the peace, contrary to Section 2A (3) and Section 2A (4) of Air Navigation band Transport Act 1973.

Garda Whelton gave evidence of arrest, charge and caution and told the court that Campbell made no reply to either charge when he put them to her after caution when he arrested her outside Togher Garda station at 7.45pm on December 27th.

Defence barrister Emmet Boyle BL said his client was anxious to dispose of the matters as speedily as possible and wished to plead guilty to both charges and was deeply remorseful and embarrassed over her behaviour.

Garda Whelton said that Campbell was highly intoxicated on board the flight and became highly abusive towards cabin crew, repeatedly calling one male steward “a f****t” and she was removed from her original seat and seated in a separate area.

She was asked to desist but she continued with the abusive behaviour, to such an extent that the pilot, fearing for the safety of all on board, felt he had no option but to divert to Cork where Campbell was arrested before the flight continued to Manchester.

Cross-examined by Mr Boyle, Garda Whelton agreed that Campbell was highly intoxicated during the incident and said she had expressed remorse and apologised for her behaviour when she sobered up while he also confirmed she had no previous convictions of any kind here or in the UK.

Mr Boyle said that his client was self employed with her own cleaning business, employing two other people as well as herself, and she was deeply embarrassed and ashamed over her behaviour which was out of character for her and down entirely to the consumption of alcohol.

She had consumed alcohol at her hotel in Fuertaventura before going to the airport where she had more drink and cabin crew later found an empty vodka bottle by her seat after a row with her partner escalated to the point that she became abusive towards cabin crew, said Mr Boyle.

Judge Colm Roberts said her behaviour was completely unacceptable, being abusive towards cabin crew, including the steward at whom she cast “homophobic slurs” as well as causing huge disruption to her fellow passengers who had their journey interrupted with the diversion to Cork.

Describing her actions as “egregious behaviour”, the judge noted her apology and the fact that it appeared to be out of character for her as he fined €500 for the first offence and a further €1,000 on the second offence.