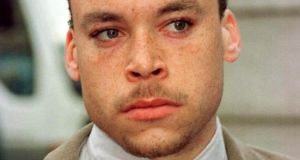 Mark Nash has pleaded not guilty to the murders of Sylvia Sheils (59) and Mary Callanan (61) in 1997. File photograph: Collins Courts

Mark Nash (42) has been sentenced to life in jail for the murders of Sylvia Sheils (59) and Mary Callanan (61) at their sheltered housing in Grangegorman in Dublin in 1997.

Nash, with last addresses at Prussia Street and Clonliffe Road in Dublin, had pleaded not guilty to the murders.

The two women were living at Orchard View, a house attached to St Brendan’s Psychiatric Hospital.

Judge Carroll Moran refused to backdate the sentence to the date of the original direction to charge Nash in September 1999, or to the date he was arrested in October of that year.

He excused the jury from jury service for life.

After a total of just under four hours of deliberation since last Thursday, the jury returned shortly after 3.30pm and delivered their unanimous guilty verdicts on both counts.

A victim impact statement was read to the court by Sylvia Sheils&#8217;s niece Suzanne Nolan on behalf of her mother Stella Nolan, the sister of the deceased.

Ms Nolan said it had been “incredibly difficult and painful for me and for all my family to deal with the consequences of Sylvia’s life at the age of 59 years being taken the way it was”.

It had been equally difficult to live through the past 18 years waiting for justice – through judicial reviews, appeals and review processes, waiting to see the perpetrator of the crime held accountable, she said.

“These murders have affected the lives of three families – Mary’s and Sylvia’s – but also the family of Dean Lyons, an innocent man imprisoned for nine months for their deaths.”

Assistant Garda Commissioner Derek Byrne gave evidence of the Garda investigation into the murders and of Nash’s previous convictions.

He is currently serving life sentences for the murders of Catherine Doyle (28) and Carl Doyle (29) at Caran, Ballintober, Castlerea, Co Roscommon in 1997, and a 10-year sentence for grievous bodily harm to Sarah Jane Doyle on the same date.

He also has convictions in England dating back to 1990, for offences including assault occasioning actual bodily harm to a woman, driving while disqualified, for having no insurance, for handling stolen goods, theft and for failing to stop at the scene of a crash.

Counsel for Nash, Hugh Hartnett, submitted that his sentence should be backdated to September 1999, the date of the original direction to charge Nash with the Grangegorman murders, or to the date of his arrest in September of that year.

Judge Moran said the Supreme Court had found, and that he also found, there had been no prosecutorial delay in the case. For this reason, he found it would not be appropriate to backdate the sentences.

The judge said his role in the sentencing part of the case was “relatively short” as the mandatory sentence for murder was life in prison.

He imposed life sentences on both charges of murder to be served from today’s date.

The judge offered condolences on behalf of all those in court to Ms Sheils’s family, who were in court. The court had earlier heard that gardaí had been unable to find any relatives of Mary Callanan.

The jury of five women and six men began deliberations at the Central Criminal Court on Thursday afternoon, following the initial charge to them from Judge Moran.

The judge recharged the jury on Friday afternoon on a number of matters.

The jury resumed deliberations on Monday morning at 11.03am, and took a break for lunch at 1pm.

They retired to resume deliberations at 2.03pm and returned at 2.44pm asking to see a number of exhibits, which were shown to them.

These included a number of knives found at the scene of the murders, a piece of lino from the floor in the house, a pair of Caterpillar boots, and two forks which were found in the bodies of the victims.

Nash remained hunched forward and looking downwards in the dock throughout the sentencing hearing. He was taken away by prison officers a short time later to begin his sentences.