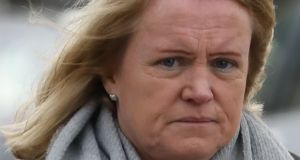 A woman who suffered scarring to her face when her car was rear-ended and pushed into a stationary vehicle in front of her has been awarded more than €80,000 by the High Court.

Lorna Bentley’s sunglasses were on top of her head and when the impact happened, the airbag deployed and the glasses fell on her face causing her to suffer extensive lacerations to her face, particularly her left cheek.

Ms Bentley (50), a mother of two from The Commons, Lusk, Co Dublin, sued the driver of the car which hit hers, Liam Nolan, Thorndale Lawn, Artane, Dublin. The crash happened on June 2nd, 2016, on the Drumcondra Road, Dublin, when she was stationary in a line of traffic.

Liability was not an issue and Mr Justice Anthony Barr assessed damages at €80,550.

The judge said the main aspect ofMs Bentley’s injuries concerned the scarring to her face, although she also suffered soft tissue injuries to her neck and lower back along with bruising to the left side of her body and left arm.

She underwent treatments for her injuries and two years after the accident, she continued to experience facial pain associated with the scarring and had continuing psychological difficulties.

A plastic surgeon thought it unlikely the scars would improve hugely with the passage of time, the judge said.

She told the court she was self-conscious of the scarring. It was particularly difficult as a divorced woman because she was now facing the prospect of returning to build a social life of her own.

She returned to work in the family motor business four weeks after the incident. However, she continues to find it difficult dealing with members of the public, for fear they would be looking at her.

Taking all the circumstances into account, and noting the scarring will be permanent and not amenable to revision surgery, the judge awarded her €30,000 for pain and suffering to date, €45,000 for future suffering and special damages of €5,550, totalling €80,550.

The court heard a higher sum of €93,000 to settle had been made before the case to Ms Bentley’s side by way of “tender offer”. Her lawyer said it only came at the 11th hour although this is disputed by the defendant.

A refusal to accept a tender offer has consequences for costs orders which Mr Justice Barr said he would deal with in the New Year.