Sex offender who poses risk to public given ‘one last chance’ 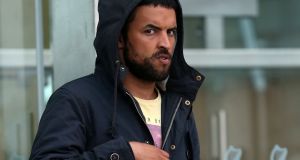 Munir Ghariani (26) received a suspended sentence last May after admitting to attacking a woman on a street ‘for the thrill’. Photograph: Collins Courts.

A judge has agreed to give a convicted sex offender who poses a risk to public safety one last chance.

Munir Ghariani (26) received a suspended sentence last May after admitting to attacking a woman on a street “for the thrill”.

At the time, Judge Melanie Greally warned Ghariani that she would have “no hesitation” in reactivating the three-year sentence if he broke any of the conditions for his release.

The Probation Service brought the case back before Judge Greally on Wednesday due to Ghariani’s failure to meet its officers.

Michelle Richardson, his probation office, said she had not seen him in person since his sentencing and that a man posing such a risk should present regularly.

Dublin Circuit Criminal Court heard Ghariani is also charged with breaches of the Sex Offenders Act because of alleged failures to notify authorities of his address.

Michael Bowman SC, defending, said that his client had a background of difficulties but had been taking his anti-psychotic medication.

Judge Greally agreed to put the matter back for two weeks. She said if Ghariani did not turn up for two weekly meetings in that time he would be jailed.

The victim was on her way home from a lecture in UCD when she noticed Ghariani following close behind her. He repeatedly asked to use her phone. The woman refused and Ghariani then pushed her to the ground and tried to grab the phone. During the struggle he bit her finger in an attempt to get her to release the phone.

The woman screamed for help as Ghariani attempted to flee but a passerby tackled and held him until gardaí­ arrived.

Ghariani has 34 previous convictions including one for sexual assault after he groped a woman from behind as she was taking money out of an ATM. He was registered as a sex offender for that offence. His other convictions include indecency, burglary and theft.