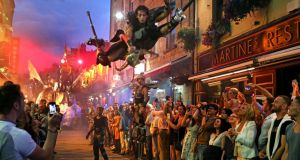 The old cliché of the welcoming Irish has been reinforced by a new travel survey which places three of our cities in the top four for global friendliness.

Galway, Dublin and Cork have all been included in a top ten list produced by the US magazine Travel + Leisure.

Galway topped the bill as the world’s most friendly destination, with Dublin in third and Cork in fourth.

Only Charleston in North Carolina in the US, which placed second, interrupted the Irish dominance.

According to the New York-based travel magazine, Galway took the highest accolade due to its festive nature, lively population and “musicality”.

“Fiddlers and banjo players, flautists and whistlers bang out traditional Irish reels on pedestrian streets and in all the pubs,” it said.

Dubliners are “confident, cosmopolitan, and gregarious”, and are best experienced in the new “hipster triangle”, with its variety of culinary establishments.

In Cork, the “verdant hills bloom with wildflowers, rivers run through ruins, and courteous locals welcome visitors with open arms.

“If, despite being surrounded by some of the friendliest people in the world, you still need a break from socialising, take to the new Wild Atlantic Way: a scenic driving route stretching 1,500 miles along the coast.”

Other cities on the list include Siem Reap in Cambodia, Auckland in New Zealand and Savannah in Georgia, in the US.

Ireland is the only country with three cities on the list.

The survey is a coup for the tourism sector, which works hard to increase visitor numbers every year.

Welcoming the news, Tourism Ireland said the renowned Irish friendliness gives us a unique selling point as a destination.

“Again and again, our research shows us that the friendliness of our people is one of our unique selling points,” said Tourism Ireland chief executive Niall Gibbons.

“It is the warm welcome and the ‘craic’ here that resonates with our overseas visitors and makes our cities, and the island of Ireland, such a great choice for a short break or holiday.”

Travel + Leisure magazine canvasses its readers every year to give their thoughts on the best city destinations for its World’s Best Awards.