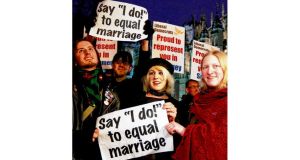 British prime minister David Cameron’s plan to legalise gay marriage passed its first hurdle in the House of Commons last night – but he was unable to get a majority of his own Conservative MPs to back him.

The legislation, on which MPs had a conscience vote, passed its second stage easily with the support of most Labour MPs, Liberal Democrats and a smattering from the smaller parties, bar the Democratic Unionist Party.

More than 130 Conservative MPs voted against the Bill, while more abstained, leaving Mr Cameron looking visibly glum when the result was announced shortly after 7pm in the crowded Commons chamber, following six hours of debate.

However, Mr Cameron described it as “a step forward for our country”, while British deputy prime minister Nick Clegg said: “No matter who you are and who you love, we are all equal.”

Fifty-five Conservative MPs – many furious with Mr Cameron over this and other issues – voted against the government on a subsequent whipped vote setting out the timetable for the legislation’s passage.

During the debate, Conservatives were openly divided on the issue, with opponents claiming Mr Cameron had no mandate or was rushing through the changes. MP Richard Drax said it was a sad day for the country.

Under the legislation, those who want to carry out same-sex weddings, such as Quakers and liberal Jews, will be able to do so. However, the Church of England and its counterpart in Wales will be formally barred from doing so.

Conservative Milton Keynes MP Iain Stewart said he had told his mother he was gay with the words “You know I am never going to be able to marry”.

He aspired, he said, to have the same loving 45-year relationship enjoyed by his parents.

His colleague David Burrowes, who opposed the legislation, said he had received death threats, while his children had been taunted in the street and told “their Dad is a bigot”, a Nazi and a homophobe because of his stand.

“I fear for the liberty of the conscience of my constituents who may not have such broad shoulders: public-sector workers, teachers and others in the workplace who see no protection in the Bill,” he said.

The changes, if passed by the Commons and the House of Lords, will apply only in England and Wales, though Scotland has its own plans to legalise same-sex marriages. However, Democratic Unionist MPs were united in their opposition.

Upper Bann MP David Simpson warned the prime minister that legislation changing thousands of years of history would undermine the Conservative Party’s grassroots organisation. “There is a price to be paid for this.”

The House of Commons had “no jurisdiction” to change the definition of marriage, said Mr Simpson as he predicted that teachers and churches would “end up before the courts and they will lose” if they refuse to accept the new orthodoxy.

South Antrim MP the Rev William McCrea said moral truths learned “at mother’s knee” were threatened by the legislation, which would “wipe away” values that had held true for centuries for people around the world, irrespective of their beliefs.

US removes stumbling block to global deal on digital tax 15:53
Q&A: What are the new coronavirus variants and should we be worried? 15:48
Many parents say school closures negatively impacted children - CSO 15:18
Body of third man found near where two brothers murdered on Cork farm 15:17
Government has no plans to create new employment status for gig workers 15:16