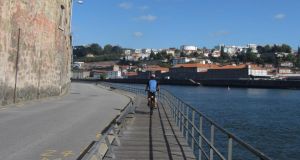 Cycling along the boardwalk in Porto 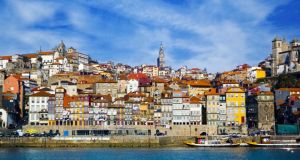 The historic centre of Porto, which is now a Unesco World Heritage Site

There are a couple of mysteries about Porto. Firstly, when did people start calling it Oporto? By all accounts, it seems to be a British “translation” of the name, and hangover from the 18th and 19th centuries when they created a stronghold here. Not a political one, but a port wine one.

However, there is no doubt that the Portuguese will look at you strangely if you call their beloved northern city anything else but Porto.

Secondly, why is it not more prolific on the carousel of city breaks? It has an extraordinary history going back a couple of thousand years, so much so that the historic centre is now a Unesco World Heritage Site.

It has the majestic Douro river cutting through it, a collection of port wine caverns and caves to visit, seafood and local wine to rival anywhere on the Riviera and, for the purposes of my trip, and even less well known, a cycle trail that goes all the way from its historic city centre out along the Atlantic coast. Portugal has, in fact, always played second fiddle to Spain in terms of tourism, with the exception of the Algarve resort scene, which is a world apart from this more natural, untouched northern coast anyway.

This catch up has certainly created a confidence and coolness about Porto. It has a slightly shabby chic element to it, with the emphasis most definitely on chic, such as the Hotel Carris where we spent the first night of our week long cycling holiday from Porto to Coimbra. Located in the historic centre of Porto, overlooking the river, this magnificent granite building has been restored with that urban stark chic that is far from ostentatious, but oozing with quiet confidence.

The elegant fish restaurant where we ate on the first night, Fish Fixe, with stark wood and glass used to contemporise the original stone walls and stunning views over the Douro, was another example of this understated confidence. And yet, just a few houses up, an old woman was hanging washing out over her balcony, in a riverside setting where most other European cities would have long banished ordinary people from living.

But Porto seems to have held on tight to its freedom from all that, and stayed true to its people and heritage. And it’s freedom that I am after on this break, with a week of carefree coastal cycling ahead of us.

On the first night, we linked up with Headwater at the hotel, the holiday company that supplies the bikes and all the brawn, providing the sort of itinerary and notes that make you feel as if you have just fallen upon someone’s precious travel journal. And then they just send us on our way, having given us all the top tips on where to swim and where to sup.

Where to drink and where to dawdle. As well as practical touches like a GPS and a local mobile phone. That is the joy of these cycling holidays. Everything about them is made to make your life easy. Our luggage was transferred for us, and so all we had to do was cycle from one four star hotel to another, where dinner and other delights such as swimming pools and saunas awaited. We didn’t have to think about anything else. Except, to tuck togs in the pannier, as there are beaches at every turn on this cycle holiday.

As we cycled out of Porto, along the river boardwalk on the southside, within minutes we had entered a world of fishermen, young and old, casting their lines from the river shore. With only 30kms to cycle before our next bed for the night, in Furadouro, we didn’t feel in any way hurried as we paused to take in the virtually unchanged with time vistas. Such as the petite port town of Afurada, where women, old and young, were either washing the daily catch in giant tubs, or hanging out their own washing to dry along the shore. A shore where, when you pedal on just half a kilometre, a state of the art yachty marina welcomed a very different clientele.

Cruising along in this carbon free manner is also suited to stretches like the Reserva Natural Local do Estuário do Douro, a wetland that precedes the coast, and where birdwatching is prolific, with everything from falcons to flamingos flying in to rest at this briny birders’ paradise. And after the brine, the beach. Or Praia, as they call it in Portugal. At each beach, there is a map that looks a little like it is for a subway except, along this line, all the stops represent beaches rather than stations. Praia de Mirimar is one of the showstoppers, with a chapel built on the rocks just a little out to sea, so that you can walk to it at low tide. This Capela do Senhor da Pedra, built 350 years ago, was the coastal chapel for fishermen’s wives where they would pray for the fate of their loved ones out at sea.

The cycling here is generally very easy, on purpose built cycling trails, and very flat. On the few occasions when we had to go on the road, drivers gave their horn a quick beep as they approached. Which, refreshingly, is the Portuguese way of letting you know that they see you, but that they are going to pass slowly and safely. In other words, it is a respectful greeting, not a grumpy “get out of the way, you langer in lycra” one, which some of us might be more familiar with. Boutique beach hotels are not a problem in northern Portugal either, with our second night in Furadouro a prime example of littoral loveliness.

This family-run hotel, overlooking the Atlantic, specialises in locally sourced food, seafood being second to none of course, as well as offering a superb collection of Portuguese wines.

We had two great discoveries at the Furadouro Beach Hotel. First, that sipping port with fine chocolate is a thing. A very good thing. And lightly sparkling Portuguese Vinho Verde, dismissed as being common as muck in the 1970s, is actually like nectar when accompanying a monkfish kebab.

The cycle route took us slightly inland after that, following the briny but beautiful Aveiro lagoon. This lagoon played a pivotal economic role in this region for centuries with a maze of canals feeding off it that allowed transport of its main resources: shellfish, seaweed and salt.

This watery landscape, with tiny villages interspersed along the dirt tracks seemed unchanged by the 21st century, such as Ribeira de Pardelhas, where a bevy of bateira, beautiful and brightly painted, traditional boats, lay moored, There was no way we would have found these places in a car. Off-road waterside dirt tracks or pathways across raised dykes allowed us to traverse these wild and wonderful wetlands where flamingos frolick and storks strut.

The heart of this lagoon region, and the mini-Venice of Portugal, is Aveiro town, where the traditional boats, moliceiro, larger and more ornate than the bateira, offer charming boat rides along its waterways.

The eponymous Hotel Moliceiro, also right on the waterfront, didn’t let us down on the ornate and charming front either and, like everywhere we stayed along the way, seemed totally unfazed by sweaty, dusty cyclists traipsing in across their elegant surrounds. This unassuming elegance and natural aesthetic is what delighted us most while cycling along this coast of Portugal, the finale in the medieval town of Coimbra being no exception.

We took a tour of the university, something that I wouldn’t normally rush to lock my bike up for. But this is something else. Built in 1290, it is one of the oldest universities in the world and, with its medieval library, stunning views of the labyrinthine town, its tiny bookshops, patisseries, galleries and chi chi boutiques, I was glad I had room left in my pannier for presents.

My favourite was a bottle of white port which I didn’t know existed until this trip. White port, tonic and ice had become the chosen aperitif of our trip. I would like to think that this is, in fact, how the name became changed along the way by the British port magnates. Because one sip and all you can say is, Oh Porto, you just hit the spot.