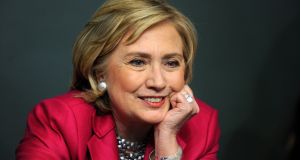 In The Women’s Podcast end of year review hosted by Kathy Sheridan guests including Ailbhe Smyth, Una Mullally, Louise O’Neill and Bernice Harrison ask: ’2015 How Was It For Women?’ Below, here are 15 top moments for women a from the year gone by.

The return of Adele! The world’s favourite brokenhearted balladeer returned with her third album 25. It immediately sold a bajillion copies, ‘Hello’ as a catchphrase was wrenched from the cold cheesy hand of Lionel Richie, and even though the album is a little bit of a duff, no one really minds, because Adele is sound.

During the summer, it was announced that in 2020 a woman will appear on the ten dollar bill. Of course Ireland was well ahead of the game with our old money. Bring back Lady Lavery, Queen Medb, and Catherine McAuley.

Hillary for the White House

Back in April, Bill Clinton’s better half officially announced her candidacy for the American presidency. Could the most powerful person in the world next November be - GASP - A WOMAN. (No, not you Taylor Swift. You sit down.) While the Republican nomination dogfight dissolved into a battle that encapsulates all of the worst elements of American eejitry, Hillary has risen above it all.

Want a Rising commemoration? The Abbey Theatre accidentally instigated one by excluding women. #themsthebreaks. The Waking The Feminists movement stormed the Abbey stage and started a crucial conversation that now needs to be acted on by the national theatre.

Women voted in the misogynist theocracy of Saudi Arabia for the first time, with 1,000 women also entering the race for election. Despite being barred from displaying photos of themselves, and only being able to address male voters from behind a screen, suffrage in a small way, came to Saudi.

When Grainne Maguire tweeted the details of her period to Enda Kenny, hundreds of women followed suit. Describing her womb as Ireland’s smallest embassy, Maguire unleashed fury through a piece of comedy activism that was covered by media outlets all over the world.

The movement founded by three women, Opal Tometi, Alicia Garza and Patrisse Cullors is spearheading a new civil rights movement in the US. Women of colour are frequently invisible in US public discourse, but right now, they’re front and centre.

Women’s history is generally ignored by cinema, but not anymore, with this great film documenting the personal and political stories about women pushing for representation in England. Empowering and inspiring, with an all-female team behind it.

Someone associated with the Kardashians isn’t an obvious port of call for progressing social change, but the impact of Caitlin Jenner’s visibility for trans rights cannot be underestimated, whatever people’s reservations.

Funny, filthy, ferocious, and just a general ledgebag, Schumer rocked into Dublin with Trainwreck in tow. The movie mightn’t have given everyone the things they wanted from a Schumer movie, but her TV work continues to astound. Special shout out for the 12 Angry Men episode.

The commemoration of the Rising happened a year early in Ireland, with marriage equality passing by referendum. It’s important to remember that this was a movement led by women. Happy Equal Christmas to them all.

The movement to repeal the eighth and once and for all tackle women’s reproductive rights in Ireland is gathering and unstoppable momentum, and 2015 was a landmark year. At the heart of this new wave are women bravely speaking about their experiences and being heard. Internationally #ShoutYourAbortion added to the power of women’s stories and voices. We’re not going to stop talking. So people better start listening.

The continued rise of Nicola Sturgeon

The Scottish National Party leader oversaw a general election which saw the SNP win 56 out of 59 seats in Scotland. Buyers remorse post referendum from the Scots, perhaps, as the First Minister of Scotland, she’s definitely what you’d call a boss.

Is there another women in sport whose body has been as critiqued and objectified as Serena Williams’? Through sexism, classism and racism, she has become one of the greatest sports people of all time. A Serena Slam didn’t transpire, but she owned Wimbledon.

Patricia Arquette at the Oscars

Winning Best Supporting Actress for her role in Boyhood, Arquette used her Oscar moment to speak out on pay inequality saying, “”To every woman who gave birth, to every taxpayer and citizen of this nation, we have fought for everybody’s equal rights. It is our time to have wage equality once and for all, and equal rights for women in the United States of America.” Good woman Trish!