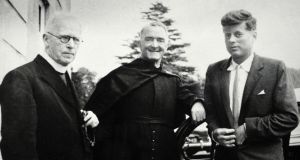 If the letters sent by Jackie Kennedy to Dublin priest Fr Joseph Leonard are confessional in nature, the letters he sent her confirm their close friendship and his role as a spiritual confidant.

Fr Leonard’s letters, contained in the White House “Social Files” at the John F Kennedy Presidential Library in Boston, were written in 1963, the year before the priest’s death. They comprise his only correspondence to her in the public domain.

The letters in the library’s archives hint at the long-term nature of their relationship but offer little insight into what they might have discussed before Jackie moved into the White House.

A collection of letters written by Jackie to Fr Leonard is to be auctioned by Sheppard’s Irish Auction House in Durrow, Co Laois, on June 10th.

Jackie and Fr Leonard swapped letters in January 1963, thanking each other for gifts exchanged. In a letter dated January 7th, she thanked him for a copy of My Ireland by Kate O’Brien, which “brought the perfect Irish note to our Palm Beach Christmas”, she wrote.

“We will both enjoy reading it because Kate O’Brien has made a great name for herself in this country with her charming style,” she wrote in a typed letter.

“We think of you often, and wish we could have sent a magic ship to bring you over to spend some time in the sun with us. With all our love, and our hopes that you will continue to pray for us in 1963,” she concluded, signing off in her own handwriting: “As ever, your devoted Jacqueline.”

A week later, Fr Leonard replied on All Hallows College notepaper, which carried its address in Dublin 9. He wished Jackie and the president “every grace and blessing for this and many other years to come” and thanked her for a “beautiful book” she sent about the White House.

“I valued above all else the inscription,” he wrote, without saying what she wrote.

“I should like the president to know how profoundly I appreciate the courage, magnanimity and wisdom with which he is carrying out the duties of his great office, and yourself to realise that I look upon your friendship as one of the greatest consolations and blessings of a long life,” he wrote.

The octogenarian priest signed off the two-page letter (in handwriting that is at times hard to decipher): “With love to you both, I am, as I have ever been, your devoted and affectionate old friend.”

“My dearest Jacqueline,” Fr Leonard starts, “I hope that yourself and the president will allow me to join in your grief at the death of your little son who is now enjoying the glories of eternal life.”

He quotes St Paul asking the Lord to comfort them: “Father of Mercies, the God of all consolation, console you in your tribulation.”

He continued: “I cannot refrain from adding that I believe Patrick Bouvier will do more for his father and much for his spirituality and comforting than if he had lived to be a very old man,” he said.

“And I say all that, owing to my friendship with the president and yourself, I look forward to his helping me also, for I need it.”

On August 21st, 1963, a White House social secretary replied, telling Fr Leonard that “Mrs Kennedy has asked me to let you know how much she appreciated your letter of sympathy.

“Hearing from old friends, at this time, is a source of great comfort to her, and therefore your letter meant a great deal to her.”

The Boston Globe yesterday quoted from another letter sent by Fr Leonard several months later when she was grieving again following her husband’s assassination in November 1963.

“I shall not write a letter of sympathy,” he told her. “I could not find the words. Instead, I shall ask you to do me a favour, and that is, to let me unite my simple feelings of love, grief and desolation to your profound and heartfelt ones.”

The length of Jackie’s friendship with Fr Leonard can be seen in another record in the JFK Library’s archive.

A memoir written by her half-brother Hugh D Auchincloss in 1997 refers to their trip to Ireland in the summer of 1950 when they met “a family friend, Father Leonard”.

He recalled their visits to the Dublin Horse Show and on to Killarney, Kildare, Galway, Tipperary and Cork, where he and his sister “each leaned over backward to kiss the Blarney Stone for good luck, each in turn holding the other’s legs down for balance.”

Auchincloss also wrote: “Jackie could later tell JFK a lot about his ancestral land, its kings and castles, and how to kiss the stone, without slipping”.