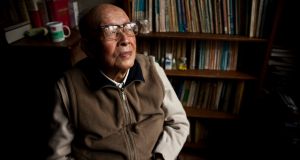 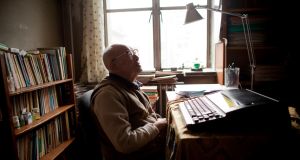 Zhou Youguang, known as the father of Pinyin for creating the system of Romanised Chinese writing that has become the international standard since its introduction some 60 years ago, has died, aged 111.

In recent decades, with the comparative invincibility that he felt great age bestowed on him, Zhou was also an outspoken critic of the Chinese government. “What are they going to do,” he asked bluntly in an interview with the BBC in 2012. “Come and take me away?” In fact, they had already done that once before, long ago. Adopted by China in 1958, Pinyin (the name can be translated as “spelled sounds”) has vastly increased literacy throughout the country; eased the classroom agonies of foreigners studying Chinese; afforded the blind a way to read the language in Braille; and, in a development Zhou could scarcely have foreseen, facilitated the rapid entry of Chinese on computer keyboards and mobile phones.

It is to Pinyin that we owe now-ubiquitous spellings such as Beijing, which supplanted the earlier Peking; Mao Zedong instead of Mao Tse-tung; and thousands of others. The system was adopted by the International Organisation for Standardisation in 1982 and by the United Nations in 1986.

Yet for all Zhou’s linguistic influence, his late-life political opposition ensured that he remained relatively obscure in his own country. The son of a prominent family (his father was an official of China’s last imperial dynasty, the Qing, which endured until 1912), Zhou was born in Changzhou, in eastern China, on January 13th, 1906. His name at birth was Zhou Yaoping; he adopted the pen name Zhou Youguang as an adult.

In 1927, after studying at St John’s University in Shanghai, he graduated from Guanghua University there with a degree in economics. At the start of the second Sino-Japanese war, Zhou moved with his wife, Zhang Yunhe, and two young children to Chongqing, the wartime capital. Their daughter, Zhou Xiaohe, died there of appendicitis. In Chongqing, Zhou worked for the Sin Hua Trust and Savings Bank. He also made the acquaintance of Zhou Enlai, who would serve as China’s premier from 1949 to 1976. In 1946, Zhou went to New York to represent Sin Hua at the Wall Street headquarters of its US agent, Irving Trust. He remained for three years, until the Communist takeover of China in 1949 moved him to return home.

“We all thought that China had a very good opportunity to develop; we didn’t expect the later turmoil,” Zhou told the Guardian, in 2008. “History misled us.” For the next few years he taught economics at Fudan University in Shanghai until, in the mid-1950s, Zhou Enlai intervened. Knowing that linguistics was a hobby of Zhou’s, Zhou Enlai drafted him to come to Beijing and lead the committee to create an alphabetic system, based on Mandarin. Before long, amid the late-1950s purges of rightists by Mao Zedong, the Communist Party chairman, he came to realise that his new calling was literally lifesaving.

Adopted by the Chinese government on February 11th, 1958, Pinyin met with rapid acclaim. But even that could not spare Zhou during the Cultural Revolution. In 1969, the government labelled Zhou a “reactionary academic authority” and exiled him to a labour camp in the Ningxia region of north-central China, where he worked the rice fields. He spent more than two years there.

On returning home, he continued writing about language, culture and contemporary affairs. In the 1980s, he helped oversee the translation into Chinese of the Encyclopaedia Britannica.

Zhou died at Peking Union Medical College Hospital in Beijing, according to Beijing News and other Chinese state-run news media outlets. Zhou’s wife died in 2002. Their son, Zhou Xiaoping, an astrophysicist, died in 2015.