Mother-in-law Day: a good time to cut them some slack

Leave the Les Dawson jokes about broomsticks to one side: as Mother’s Day approaches, the soft wall of support that comes from mothers-in-law deserves recognition 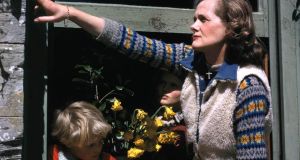 Novelist Daphne du Maurier and her two children at the window of their home in 1947. Photograph: Popperfoto 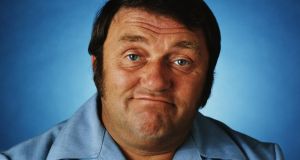 The farmer from Roscommon wanted me to meet his mother. When I did she said my hands were too small and I wouldn’t be much good for “carrying buckets of water”. I think she wanted her son to marry a kind of gorilla. In the end I didn’t get the job. You know the one: the daughter-in-law position. I got over it swiftly enough. I knew I hadn’t found the right one. The right mother-in-law.

Let’s get all the bad jokes out of the way. Question: What does a mother-in-law call her broom? Answer: Basic transportation. Hilarious. All you have to do is google Les Dawson. Where does all this prickly tension come from? I mean, it’s not as if you’re going to run off with her son.

I asked my husband recently how he felt about having a mother-in-law. He is, by now, used to having odd questions lobbed at him from a kitchen corner.

“It’s great,” he answered. “It’s like having an extra family without any of the hassle.”

“Anything else?” I asked.

“No, that’s it,” and he went back to eating his ice cream.

But it’s a bit different for daughters-in-law. Before you came on the scene, that man, the one you’ve decided to spend the rest of your life with, belonged to her. Is “belonged” too strong a word? No, I don’t think so. My own son is still very young, but after just five years we’ve been through a lot together. Like that long-haul flight to visit his nonna (my mother-in-law) when he sat on my knee watching the doors of the aircraft close up in Dublin and said in a nice, clear voice, “Want to go home”, which he continued to say at five-second intervals until we landed in Boston about seven hours later. I know that in time he will have a life of his own – but it can be hard for a mother to hand over her son. If it’s the same boy who, when reading about King Arthur and Guinevere recently, looked at me and said “I already falled in love with you”, then I get it, I do.


My own mother-in-law
Seven years ago I was nervous meeting her. My then-boyfriend and I stepped out of a creaking lift and the first thing I saw were two snow boots parked outside her front door. They were like something Little Red Riding Hood would wear. But I was scarred by Roscommon and could hear the music from Jaws in my ears. What I didn’t expect was Margie, a diminutive woman with very dark eyes to come barrelling around a corner. “Hey!” she shouted and she threw her arms around me. I’m not sure which one of us got lifted off the floor. Because I’m Irish she had started making “tea” when my flight landed at Logan. In other words she had actually made the tea roughly an hour earlier. I sipped it politely, wondering what time it was in Ireland and looking around for a potted plant that seemed thirstier and more Irish than I was.


Daphne du Maurier
Listening to an interview with former Miss Ireland Olive White about her life and her husband’s mother, Daphne du Maurier, I was a bit disappointed to hear the writer described as “the most perfect mother-in-law”. I sensed in White a woman who could have told a great story but who had learned early to build a wall that would protect her.

Du Maurier, from a wonderfully eccentric family, was frequently photographed wearing men’s trousers and was reputed to have had at least one lesbian love affair. When she was working on a novel, her children were reduced to posting notes under her door. It’s hard to believe that as a mother-in-law she would have been “perfect”. As descriptions go it seemed a little too small and neat for her.

Later in the same interview White said the secret to a good marriage was “compromise, compromise, compromise”. She also advised saying, “Yes, darling” a lot and “Yes, you’re right” a lot. (So that’s where I’ve been going wrong.) My own mother-in-law would have struggled with this advice too. Neither of us were “go with the flow” people. No one in their right mind would have said we were perfect.

Margie didn’t look like someone who would be interested in carrying buckets of water either. In fact she wasn’t into carrying anything unless it was a really nice “purse”. Her ability to find a parking spot right beside a shop door was legendary. She had lovely clothes and jewellery and liked a good martini. She took great pleasure in buying gifts for me: sheepskin slippers and a dressing gown that looks like a duvet. As a younger woman she had been a good dancer, had taught yoga and liked to laugh. For her, laughing was like breathing, it was that easy. I quickly saw that this was her way to surf over life’s difficulties, something that connected her to other people and everyone was welcome up there on that wave with her.

Our relationship was not without its moments. She was of Sicilian descent and could be a bit fiery. She was also very quick off the mark and didn’t miss anything. There was the time I put too much detergent into her washing machine and it flooded the kitchen floor. Another time, when her health was beginning to decline, she asked me to blow-dry her hair; I accidentally squirted mousse on her top and she looked a bit like Tina Turner when I’d finished with her. And she did her very best to educate me about her Insinkerator or “garbage disposal” in her kitchen. She called it “the goat” and told me that it would eat anything (but not teaspoons, it transpired).

“Lord knows it isn’t easy,” was all she ever said about the business of mothering. Asked for her advice once, she shrugged and said: “Love them.” Not one to interfere, she didn’t feel the need to say anything more.


They were mothers first
As Mother’s Day approaches, it’s very easy to forget that soft wall of support in many of our lives that comes from our mothers-in-law. Yes, one or two have been known to travel by broom, but this might be a good time to cut them some slack and remember they were mothers before being mothers-in-law. There was a time when they liked nothing more than to give their own child a bowl of ice cream, dance and maybe do a bit of yoga.

I was sitting at the pool watching my son’s swimming lesson when I got the news we had lost her. She was 80 and it was not unexpected – and yet, I wasn’t really prepared for the feeling of being winded, that peculiar disbelief that comes over all of us when a very real, living person is actually gone. I realised, perhaps only then, that I was one of the very lucky ones, that by marrying her son, I had been given, albeit briefly, a second mother.