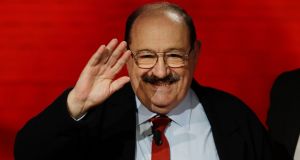 Umberto Eco, who has died aged 84, was a polymath of towering cleverness. His novels combined cultural influences ranging from TS Eliot to the Charlie Brown comic-strips. Linguistically technical, they were at once impishly humorous and robustly intellectual. For relaxation, he played the recorder, and read dictionaries.

Eco’s first novel, The Name of the Rose, an artful reworking of Conan Doyle with Sherlock Holmes transplanted to 14th century Italy, was published in 1980. Translated into 30 languages, it sold more than 10 million copies and was made into a film starring Sean Connery.

Yet the success of The Name of the Rose weighed heavily on Eco and privately he regarded Jean-Jacques Annaud’s film of the novel as a travesty.

His second novel, Foucault’s Pendulum (1988), was a thriller set amid shadowy cabals and conventicles such as the Hermetic Order of the Golden Dawn and the Rosicrucian Society. Eco saw modern-day political parallels with these and other sects; indeed, the P2 masonic lodge and the far-left Red Brigades indulged a similar secrecy and fanaticism.

Many wondered where Eco would go next. His third novel, The Island of the Day Before (1994), was written to strict literary formulae and read more like an exercise in style than a work of literature infused with feeling and expression.

The Aesthetics of Thomas Aquinas

Already, the young Eco saw the world as a web of signs and symbols waiting to be deciphered. His passion for medieval culture strengthened over the years, and he gleefully decoded what he called “the avalanche of pseudo-medieval pulp” books and strip-cartoons.

After university, he worked in Milan as a journalist for Italy’s state-owned RAI television network and then as an editor for the publisher Bompiani.

He developed an enthusiasm for difficult, avant-garde artists: in prose (late) Joyce, in music Karlheinz Stockhausen and in verse Stéphane Mallarmé.

In 1966, he was appointed professor of semiotics – the study of signs and symbols – at Milan Polytechnic. His cultural writings began to appear in a variety of national publications; the Italian public came to know him through his witty weekly column, “La Bustina di Minerva”, for L’Espresso magazine, collections of which were later published in English.

He was perhaps at his best when composing bookish parodies and spoof sequels to famous novels. (In one of these, the narrator of Marcel Proust’s À La Recherche du Temps Perdu dies in Dublin after reading Joyce’s Ulysses and drinking too much Guinness.)

Italian university professors are expected to enter public debate, and Eco did not disappoint. “Journalism,” he announced with characteristic self-confidence, “is my political duty.” Furthermore: “I believe it is my job as a scholar and citizen to show people how we are surrounded by messages.”

In this Eco was not so different from other campus media commentators, such as Susan Sontag and Marshall McLuhan. Like them, he could sometimes appear pseudo-cerebral. In one essay, he discussed the figure-hugging comfort of his denim Levi’s. “Well, with my new jeans life was entirely exterior: I thought about the relationship between me and my pants, and the relationship between my pants and the society I live in … I had achieved epidermic self-awareness.”

Eco’s fourth novel, Baudolino, which appeared in Italy in 2000, was set in Byzantine Constantinople. An enjoyable quest story, it was freighted with the author’s by now familiar typographical eccentricities, footnotes, numerological games and inventories.

The book was a great success in Italy, though some critics complained that Eco had sold out to fame. In the days before he became the emperor of international bestsellerdom, he wrote a sneering critique of the 007 novels in which Ian Fleming emerged as a high-end Mickey Spillane, cynically devising entertainments for a reading public both “popular and serious”.

Yet Baudolino, not unlike The Name of the Rose, appealed to a remarkably similar readership. Whatever his merits as a novelist, Eco was an exceptionally shrewd self-promoter: it is not often that an academic keeps company in the book charts with Jackie Collins and Dick Francis.

The Mysterious Flame of Queen Loana

He continued to read and enjoy strip cartoons on his retirement from Bologna University as professor emeritus in 2008. He published two further novels, The Prague Cemetery (2010), in which characters voiced disturbing anti-Semitic diatribes, and Numero Zero (2015), a razor-sharp thriller set in Milan in 1992 in which Eco explored the darker side of 20th-century Italy and the so-called “strategy of tension”, where Italian secret-service chiefs allegedly connived with cabinet ministers to implicate the left in acts of terrorism and bring back fascism. The novel, happily free of Eco’s occasional verbosity, topped the bestseller charts in Italy.

Eco is survived by his widow, Renate (née Ramge), a son, Stefano, and daughter, Carlotta.

The importance of relationships and belonging
6

Ireland is home, and it is beautiful, and we do not talk about it enough
10