It might not be cheap but it’s charming, fun and has seriously extended range 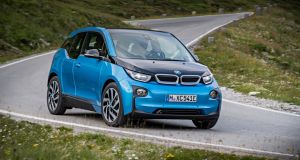 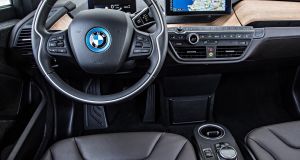 It’s funny how perceptions change. When I was young in a sepia-toned world the drivers who were on the receiving end of most abuse were those behind the wheels of BMWs. Arrogant, aggressive and antagonistic with an addiction to tailgating was the accepted caricature of this firm’s car owners.

Times have changed though. BMW, for all its massive sales success in Ireland in the past 15 years, now has a slightly less combative image, one of classiness and desirability with a little less of the disdain from those unable to afford one.

With the i3, there is the chance for BMW to slip seamlessly into full-on caring and sharing mode. The little electric car has been around since 2014, but had failed to make much of a dent in Irish buyers’ collective consciousness, mostly down to a combination of being small, with a big price tag and, well, electric.

For all the talk of Ireland being a perfect test case for the introduction of electric motoring, few brave souls have taken on the mantle of early adopter. A combination of cost, lack of infrastructure and that ever-present spectre of range anxiety has held people back.

In fact, one-charge range climbed to 300km on the European NEDC (New European Driving Cycle), but cognisant that the official test has been thoroughly undermined in the public eye, BMW says 200km is a more realistic day-to-day figure.

So it proves. A writer must write of what they know, so I can only speak of how the i3 performed on my own regular driving cycle, but it is significantly improved.

I was testing the ‘REX’ version, the range-extender, which uses a tiny two-cylinder moped engine and a seven-litre tank of petrol to keep the batteries alive should you run out of charge with mileage still to go to get home. It adds, generally, around 100-120km of extra range, easing many the furrowed brow.

No longer. The new i3 cruised up to Dundalk at 120km/h, air conditioning on with an occasional burst of heated seat, without it or I breaking a sweat. We could easily have made it all the way home to Belfast by using the petrol reserves, and just possibly on only the batteries, but with discretion being the at least two thirds of valour, I decided a quick charge was in order.

Thirty minutes later, cup of tea enjoyed and emails checked, the i3 and I set off again and got home without ever breaking the seal on the petrol tank.

That only goes so far towards explaining the i3’s appeal. Yes, it’s clearly much more functional than it once was, but that has unlocked further rewards. With the range and usability now on more solid foundations, you can concentrate on the rest of the car, and the biggest joy is that it’s utterly charming.

It’s hardly the prettiest BMW ever made (1970s 3.0 CSL – no argument brooked) but it has a pugnacious, terrier-like cuteness that’s close to irresistible.

The back is a tiny bit less successful on account of it being a bit tiny. Kids will fit, and the old-Mini-Clubman-style rear-hinged doors, which require the front doors to be opened first, do at least mean that they’re secure in there, but it’s not a hugely convenient arrangement. The boot, at 260 litres, isn’t terrible but it’s well behind what you’d get in a Nissan Leaf or Hyundai Ioniq.

Neither of those is fun to drive, though. The i3 is. It’s not perfect – those narrow tyres, designed to maximise aero performance not grip, can make the i3 feel a tiny bit skittish at times, and occasionally the steering feels a touch artificial and ‘twirly’ but for the most past the i3 lives up to the old ‘Ultimate Driving Machine’ tag.

It’s agile, responsive, entertaining and, wait for it, quick. It has 170bhp from its electric motor while its 250Nm of torque is delivered the millisecond your foot brushes the accelerator. Performance is better than brisk and even the ride quality isn’t too bad, although a bit hard-edged around town.

BMW is offering a tempting finance package, which brings monthly repayments down to a reasonable €326 a month (within striking distance of similar plans for the Leaf and Ioniq).

Presumably the price is what’s holding sales back more than anything else. The i3 has shifted a mere seven units so far this year, 44 in total last year. So far in 2017, Hyundai has shifted 128 Ioniqs, the majority of which have been pure-electric models, while Nissan has sold 124 Leafs. The BMW is an expensive small car.

One that I’ve kind of fallen for, though. It’s not for everyone, and yes it’s expensive, but here is a BMW that you can enjoy driving yet salves your social conscience.

Who could get mad at a car that looks like this and saves the Earth as it drives? Who could equally be mad at the driver within, even if they have spent such a big chunk of change on a posh German car? Tailgating? No, honest – I was just using the aerodynamic tow of your car to increase my battery range…

Verdict: The best electric car this side of a Tesla. Not cheap, but charming, fun and with seriously practical performance and range.