As our idea of what makes a family diversifies, so do festive gatherings 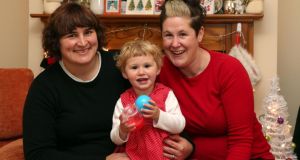 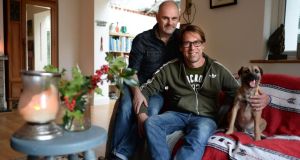 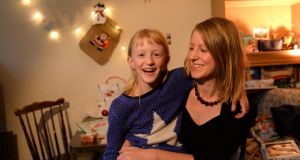 Paulina Abzieher and her daughter Alice, preparing for Christmas, at home in Dublin. Photograph:Dara Mac Donaill 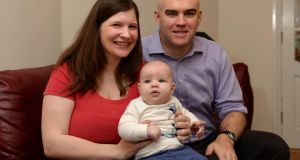 Christmas Day celebrations have come a long away since the manger, and today’s festive families can be made up of everyone from friends and neighbours to step-parents or siblings and single parents, with new generations around the table or this generation absent due to emigration. We talk to to four families about their Christmas plans.

Viennese waltz
Austrian Paulina Abzieher has been living permanently in Ireland with her daughter Alice for the last five years. She and Alice are spending Christmas in Vienna with Paulina’s nearest and dearest, her mother, Christina, her step-father, Peter, and her step-sister, Heidi, who is the same age as her. Although Peter and Christina have been together for 25 years, Paulina and Heidi didn’t live together as children.

Alice has no contact with her father. “Not having her dad around is a 365-day a year situation. Christmas is no different.”

The festive season in Vienna is all about Christmas Eve, Paulina explains. It is tradition that the tree is decorated on December 24th. The children don’t get to see it until after the angel Kris Kindle has visited and delivered presents. The decoration of the tree with lit candles and glass baubles form part of his duties. Afterwards, the family gathers around the tree to read the story of Christmas and sing carols. Silent Night is a favourite.

Later that evening they sit down to their festive celebrations, a big dinner together. Roast beef, goose or carp have all been served at Christmases past. They also bake traditional biscuits like gingerbread - a custom Paulina’s grandmother, who passed away this year, taught her.

“We’re lucky. We don’t see each other that much so there is very little to argue about. My parents love to spoil Alice. They take her ice skating and to visit the Christmas market. It means I get a break from parenting duties.”

When Paulina spends Christmas in Ireland it is with her new extended family, One Family members, who share the babysitting, shopping and emergencies that usually fall to members of the more traditional family to help out with.

“Either way Alice gets the best of both worlds because in addition to the gift giving on December 24th she receives gifts from the Irish Santa on December 25th,” Paulina explains.

Meeting donor Daddy
Charlotte McCallum-Mallard and her wife Beth Mallard have been together five and a half years. They met at a world food festival in Dunedin on New Zealand’s South Island

They wanted to have a baby and some years ago asked a close friend, Chris Hopkins, also from New Zealand, to be their donor. He took a year to consider the proposal. When he said ‘yes’ he was single but then met a girl who, in Charlotte’s words, ‘lost her lolly’, a kiwi term for going ballistic, when she heard the news. She believed the couple wouldn’t want to know Chris once he had donated.

Lola was conceived in New Zealand. Then Beth got offered a job at NUI Galway and the couple asked Chris if they could take up the opportunity. With his blessing their daughter Lola, who is now 20 months was born in Ireland, to Charlotte who arrived on Christmas Eve.

Chris wasn’t present at her birth. In fact he will meet Lola for the very first time in early December when he and his new girlfriend arrive in Ireland. “Up until now they’ve only bonded on Skype, Charlotte explains. “While Chris has been quite animated with Lola on Skype, and they have a really good online relationship, meeting her in person will be different.”

Lola’s dad will be bringing presents including classic Kiwi picture books If You’re a Kiwi and You Know It and Hairy Maclary by New Zealand author Dame Lynley Dodd.

Lola’s mothers, her father and his girlfriend will all be spending Christmas Day in Galway city. They’ve been invited to dinner by a Galwegian lesbian couple, Sinead Cosgrove and Paula Kelly, who Charlotte describes as “Lola’s surrogate aunties”. For them friends is the new family at Christmas.

Friends or family
Sligo-born novelist Brian Finnegan is the partner of Belgian Miguel Gernaey. The couple met at a Sound of Music party that Brian reluctantly attended. Such was his lack of enthusiasm for the pink pound gathering that he had arrived dressed as a curtain, paying homage to the scene where governess Maria, played by Julie Andrews made curtains for the seven Von Trapp kids from damask drapes. The couple, who have been together 10 years, alternate Christmas; one year they spend it with their respective families and the next with each other and with their friends.

Brian’s mother wasn’t happy to hear that he was only going to spend every second Christmas at home. “As the gay one in the family I was seen as being single and able to go home for the festivities every year,” he explains. “Miguel and I are family now.” Scout, their dog is also an important part of their family unit.

This year the biological family comes first. For Miguel, Christmas will be celebrated on December 24th in his hometown of Ghent. Brian will be spending December 25th with his mother, father and younger brother in Sligo “watching Fair City on full blast” as his parents are now hard of hearing. Brian’s son, Colum who lives in Berlin, will probably join them on Stephen’s Day. He is spending Christmas Day with his mother and his four younger half brothers and sisters.

When in Sligo, Brian is on kitchen duty with all the trimmings, while his mother still insists on cooking the turkey. This is followed by a diet of festive television and a tin of Roses. “Christmas without a box of Roses is weird,” he says. “I always miss them.

Last Christmas Eve Miguel cooked roast duck for the two of them. Brian was also in the middle of writing his second novel and didn’t really take much time off so the big day was relatively low key. In 2010, the year of the big snow, he recalls spending Christmas Day together on the sofa, making their way “through the entire box set of Downton Abbey in front of a roaring fire”.

Knowing Me, Knowing You by Brian Finnegan is published by Hachette Books

Generations, emigration
Electrical engineer and new mum Sorcha O’Driscoll married Bryan Curley in 2012. Their son Conall, born in June of this year, is the first of her family’s fourth generation.

This year she will be spending Christmas at her home in Dublin. She’s hoping her mother Mary Horan and father Tom O’Driscoll will join them. Sorcha’s grandmother, Maura Horan (83), adores her great-grandson. “Her face lights up when she sees him,” Sorcha says. “It remains to be seen though if she will be well enough to travel to Dublin from her home in Cork.”

Two of her three brothers won’t be home either. “ she laments. Rowan will be on his honeymoon, having just married an Australian girl, Bel Moffett from Brisbane. His brother Eavan will be spending the yuletide in Boston. Both brothers are part of generation emigration and while they have managed to make it home for Christmases past they will have to skip Christmas 2013. She’s hoping her other brother, Iarla, who lives in Cork, will join them in Dublin for the day.

For Conall’s first Christmas they’re keeping things simple. Sorcha will be on turkey and ham duty and she’s hoping her mother will contribute a side of traditional spice beef, a Cork Christmas essential.

Your priorities change when you have a baby, she says. “Previously we would have met friends for Christmas Eve drinks. Now it’s going to be an afternoon get-together with friends who have kids. Christmas is more magical with kids. Santa is back in town and Bryan’s nephew, Patrick, age four will be in the house showing off his spoils.”

This is her first Christmas spent with her immediate family. Christmas 2012 would have been spent with her family in Cork. “On Christmas Eve it’s been a custom for us to go into town for breakfast followed by some last minute gift shopping,” she explains. “It’s always been the whole family. Those childhood traditions are slowly disappearing. But this is a chance for Bryan and I to create new traditions.”

From pizzas to smoothies: 10 delicious ways to cook with brussels sprouts
Real news has value SUBSCRIBE