John McCormack bought this six-bedroom, turreted house on the Rock Road in Booterstown eight years before he died 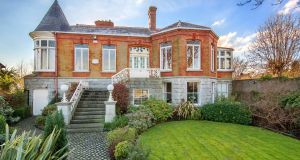 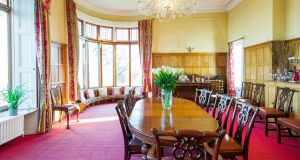 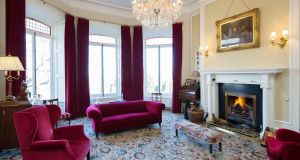 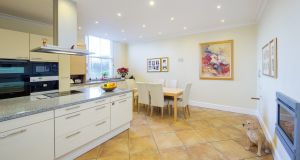 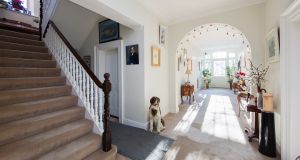 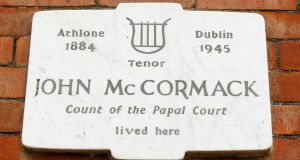 A landmark house in Booterstown, south Dublin, where tenor John McCormack once lived, is for sale for the first time in 40 years.

The distinctive redbrick with a turret at one corner will be familiar to anyone who commutes regularly along the Rock Road: it stands high above the traffic on the road into town, not far past The Old Punch Bowl pub at the bottom of Booterstown Avenue.

Glena is an original, inside and out, with a Céad Mile Fáilte inscribed in tiles in the entrance porch, beautiful stained glass windows, an oratory, some rich plaster friezes and an oak-panelled diningroom with a plaque inset in the wall, thought to have been given by McCormack to his wife Lily.

The current owners, who bought the house in 1975 for £37,500, have kept most of the original features of Glena, a detached Victorian built in 1888.

They have maintained and modernised the house, a listed building, over the years – there’s a smart SieMatic kitchen on the ground floor, a lot of recessed lighting and several en suite bathrooms.

After 40 years, the 500sq m (5,382sq ft) six-bedroom house – bright and comfortable in spite of its size – is too big for the couple now that their children are grown. Glena is for sale by private treaty through Lisney for € 3.6 million.

John Count McCormack – he was made a Papal Count in 1928 in recognition of his work for charities – was a world famous tenor in the first half of the 20th century.

Glena was the last home of the singer, born in Athlone in 1884: he had homes in Ireland, England and America, and bought Glena in 1938, nearly eight years before he died in 1945.

A plaque to the tenor, unveiled by the American ambassador to Ireland in 1966, greets visitors at the top of the granite stairs leading to the front door.

When the couple selling Glena moved in in the 1970s, American tour busses often stopped outside to view the house; that rarely happens now, as McCormack’s fame has waned.

The drawingroom on the right of the hall has views over Booterstown Marsh to the sea through a trio of tall windows topped by stained-glass panels which effectively block the sound of traffic from the busy Rock Road. In McCormack’s time, double doors opened from here into another reception room, making it a good space for recitals. The double doors are still there, but this room is now used as the main bedroom. A huge four-poster bed beneath a large skylight in the main en suite bedroom now occupies the spot where the piano might have stood.

Another set of double doors at the side of the livingroom opens into a small oratory that has a tiny chapel with a marble altar at one end and ornate stained-glass windows at the other.

There are three large windows in the diningroom on the left of the hall: the largest is a curved corner window under the turret with window seats and good views of the sea.

This large room easily accommodates an eight-seater dining table and has plenty of room for sideboards. A small door at the end of the room opens onto an iron walkway leading to a glazed conservatory/ glasshouse at the side of the house.

There are three more large, bright bedrooms at this level, two with en suite bathrooms.

Most of the family’s living space is downstairs, at garden level, where the hall leads to a glazed door opening into the back garden. There are plenty of rooms down here: two more bedrooms, a cosy family/TV room at the back of the house and a large family room/games room at the front. The family bathroom is down here along with a shelved study, another smaller study and a store room.

The SieMatic kitchen/breakfastroom was put in 12 years ago: it’s the most modern part of the house, with polished marble breakfast bar, tiled floor and wall-mounted gas fire. A door leads into a utility room off it.

Outside at the back, there’s a large patio and a summerhouse; mature trees and herbaceous borders surround a neat lawn.

A garden path leads to a private lane where old stables were turned into parking for up to five cars. (One space was apparently extended to fit McCormack’s Rolls Royce.)

There are three homes on this gated laneway, accessed off Grotto Avenue, a small road that leads to St Mary’s boys’ school – its playground is on the other side of the lane.

Free-for-all: Irish tourist attractions open their doors for one day
3

‘People think I’m drunk because of my slurred speech’
5

Buy yourself a dream. . . with the planning headaches sorted
7

Soreness is good, scales are pointless: The 10 biggest myths in fitness
8

What will €185,000 buy in Antigua, France, Italy, Spain and Co Waterford?
Real news has value SUBSCRIBE