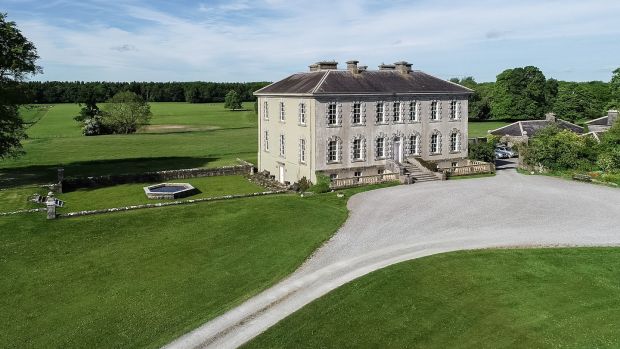 “A piece of heaven,” is how Michael Ramsden describes his home of 35 years. “You cannot hear a thing at night, there is no sound, light or air pollution,” says the former art dealer and owner of Saskia Antiques.

Ramsden and his wife, Sarah, purchased the vast property in 1985 when it was in a state of decline and spent years restoring the estate to what it is now; a majestic estate tucked away near the small village of Borrisokane in Co Tipperary.

The estate itself dates back to the 16th century, when Killaleigh Castle was erected on the lands by the MacEgan Clan. The castle still stands and while structurally sound, it requires complete restoration. Points of interest are a porthole-style window with a Latin inscription that reads: “Ora Pro-Connor 1602” and an impressive stone newel staircase.

The seven-bay main house dates from 1745 and was constructed for Francis Sadlier and passed to the Trench family in 1797, who retained ownership of the estate until it was bought by the Ramsdens in the 1980s.

Its design is attributed to architect and artist Francis Bindon, who was described by Deane Swift – cousin of Jonathan Swift – as “the greatest painter and architect of his time in these kingdoms” – which included Ireland, England, Scotland and Wales.

Bindon’s legacy is remembered in notable houses dotted though the Irish countryside such as Woodstock in Kilkenny, Newhall in Co Clare and Russborough House in Co Wicklow – said to be the most beautiful house in Ireland – where he worked in collaboration with Richard Cassels. His most famous painting is a portrait of blind harpist Turlough Carolan which hangs in the National Gallery in Dublin.

The imposing house that stands at the end of a half-mile long driveway, stood on a 60-acre estate when the Ramsdens purchased the property. Over subsequent years they acquired neighbouring lands which now gives the estate 300 acres, in the form of parkland, woodland and formal gardens. Sopwell is also bordered by some 500 acres of Coillte (the semi-State forestry company) land, allowing total privacy for new owners.

Small details, such as sourcing fine Georgian chimney pieces to replace Victorian counterparts installed in the 1860s, indicate the labour of love the Ramsdens undertook to restore Sopwells’ heritage.

In addition to the restoration of the main house with its fine Georgian architecture, the Ramsdens also renovated three properties on the estate – two gate lodges and a gardener’s cottage as well as cut-stone buildings in the courtyard, which provide more accommodation in a coach house, studio and workhouses. Also included in the sale is a pretty bailiff’s house – originally a steward’s house – that sits adjacent to Killaleigh Castle within the walled enclosure. Like the castle, it is structurally sound but requires renovation.

Providing a kaleidoscope of year-round colour, the gardens now include a new tennis court and sunken garden. “There used to be a conservatory here until the 1950s and we decided to install a sunken garden in its place. We placed a lily pond at the centre and the limestone used for walls, terracing and steps came from the parapet of an old Dublin building,” says Ramsden.

In 2009, under expert guidance, a walled garden was added to the estate to incorporate a fruit orchard with apple, pear, plum, medlar, walnut and cherry trees including some old heritage varieties. Behind a mixed hedgerow divide lies a productive garden, with a large soft-fruit cage, a flower and herb garden and vegetable beds.

A lovely feature in springtime is the spray of yellow hues from the 35 varieties of daffodil which were planted in Victorian times.

Among the many ancient and specimen trees throughout the estate are some particularly fine Spanish chestnut, a noted ancient beech wood and a rare Siberian crab-apple. The woodlands include indigenous oak, beech, ash, larch and spruce, which are a haven for red squirrels, pine martens, foxes and hares with buzzards, owls and falcons also regular visitors.

The house itself is exceptional. The spacious reception hall with distinctive Doric pilasters divided by a screen of arches give an indication to the elegance that lies within the 1,322sq m (14,235sq ft) residence.

Ten bedrooms are arranged across the two upper floors, with a further bedroom at basement level. Currently there are six main reception rooms along with two kitchens, a vast servants’ hall, boot room, pantry, office and wine cellar. It will all be a bit of a moveable feast for prospective owners depending on their living requirements, but one thing this property is not short of is space.

The bathroom of the main bedroom suite, which occupies the southeast corner of the property, is charming and its design was inspired by the bathroom in Chateau de Rambouillet in France; where Napoleon spent his last evening before his exile to Saint Helena.

Sopwell’s situation on 300 acres, with its own castle – not to mention the exceptional restoration of the principal residence – is likely to attract international interest.

“We will miss what we have created here in Sopwell for the past 35 years,” says Ramsden, adding that “spending lockdown here was a joy”.