Who knifed Queen Victoria’s portrait in Dublin in 1916? 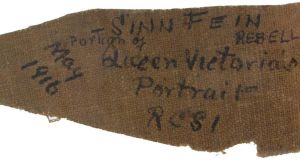 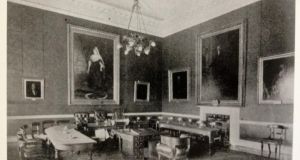 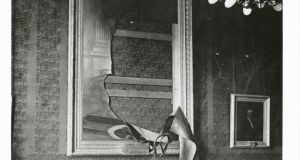 Whyte’s auctioneers sale of historical collectibles in Dublin next Saturday, September 14th, includes what is described as an “intriguing” piece of canvas inscribed on the reverse: “May 1916 Sinn Fein Rebellion Portion of Queen Victoria Portrait RCSI”.

The 5cm by 13cm fragment has traces of paint on the other side and has been assigned an estimate of €300-€500.

During the Easter Rising, a group of rebels led by Countess Markievicz occupied the Royal College of Surgeons of Ireland (RCSI) on St Stephen’s Green. A life-size portrait of Queen Victoria that hung in the boardroom was slashed beyond repair by the rebels. A photograph taken of the room after the Rising shows some of the damaged canvas still hanging from the huge gilt frame.

It is not known who destroyed the painting although it was reputedly one of the younger rebels who, when admonished, claimed that he needed the canvas to make puttees (leggings worn by soldiers). The rebels did not destroy the other works of art in the college, which included marble busts of Queen Victoria’s consort, Prince Albert, and of King George IV, which are still on display today.

The portrait of Queen Victoria had been commissioned by the RCSI in 1887 on the occasion of her golden jubilee and was unveiled during a lavish ceremony the following year attended by the crème-de-la crème of Irish society. The artist was Stephen Catterson Smith (the younger) a well-known portrait painter in Victorian Dublin and son of Stephen Catterson Smith (the elder) who had painted an earlier portrait of the queen commissioned by Dublin City Council for the Mansion House.

The incident was recalled by Margaret Skinnider, a rebel volunteer who was in the building during the Easter Rising.

In Doing My Bit For Ireland, her memoir published in 1917, she claimed that the destruction of the painting was justified because the queen, referring in 1848 to the crushing of an earlier Irish rebellion, had written: “The Irish should receive a good lesson or they will begin it again”.

Skinnider added: “From this quotation any one can see that the Queen looked upon the Irish as aliens, which, indeed, they are.”

Queen Victoria died in 1901. At the time of the Easter Rising, her grandson George V was King of the United Kingdom of Great Britain and Ireland.

Róisín Ingle: My children’s resilience has taken my breath away
8