What it went for: auction highlights

James Bond memorabilia at Christie’s, fine period interiors at Adam’s and a Dublin book fair to look forward to 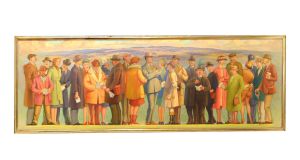 Some Characters Seen at Cheltenham on Gold Cup Day, by the English artist Waldron West, formerly hung in the Cashel Palace Hotel, Co Tipperary and made €13,000

Thursday (February 18th)
Christie’s, London. Charity auction (for Médecins Sans Frontières/Doctors Without Borders) of memorabilia from Spectre, the 24th film in the James Bond series. All lots were sold, including an Aston Martin DB10 car for £2.4 million (£1 million-£1.5 million) and a Spectre Blu-ray (disc) signed by Daniel Craig, together with a pair of initialled “JB” Tom Ford lapis lazuli cufflinks worn by him in the opening scene of the film, £30,000 (£3,000-£5,000).


Sunday (February 28th)
Lev Mitchell & Sons, Auctioneers and Valuers onsite auction at The Glebe House, Dowth, Drogheda, Co Meath, at 2pm. Lots include: a “very rare steward’s badge from Slane Races, 1903”; a portrait of Patrick James Carroll, founder of the PJ Carroll tobacco company; a letter from the Duke of Leinster to Mr Carroll “thanking him for the gift of a packet of cigars”; plus coins, medals and old Irish banknotes.

Looking for a new frock? Here's why you should rent, not buy
5

Vicky Phelan: ‘My motto for life is to live for the moment’
10