Cars, bikes and motorcycles at Victor Mee; silver and figurines in Adam’s At Home sale 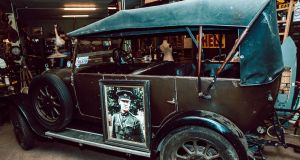 The forthcoming Vintage Car, Motorcycle and Collectables Sale on June 30th by Victor Mee in Cavan includes more than 60 lots from a private collection of motors and accessories.

One of the highlights is a 1927 Humber 9/20 Tourer, which has had its fair share of history. The car played its part in the second World War when it was in the ownership of the Renfrewshire Territorial Army in Scotland. Since then, it has been used as a wedding vehicle and, most notably, as the car used in the film The Wind that Shakes the Barley, the 2006 Ken Loach film starring Cillian Murphy. The automobile, in full working order, is listed with an estimate of €10,000-€15,000.

The Humber Company, which produced this vintage car, started life as a bicycle maker, eventually selling its brand to Raleigh in 1932, when the motor division was deemed to be more lucrative.

The sale also includes a very old bicycle, which predates the French design of the Boneshaker from 1869. “This is an example from the mid 1800s of the first pedal bike ever made, when three wheels were built for stability,” according to auctioneer Bryan Mee.

In the mid 1800s, bicycles not only allowed the pleasure of cycling in the fresh country air, but they permitted ordinary men and women to travel much greater distances than on foot, leading the noted biologist Steve Jones to attribute the invention of the humble bicycle as “the most important event in recent human evolution” as it widened the gene pool – allowing men and women to meet and marry others beyond their communities. The bicycle is listed with an estimate of €3,000-€5,000.

Also listed is what many considered to be the epitome of Irish childhood chic in the 1970s, an old Chopper bicycle (€125-€225) and a motorbike which also holds a special place in our national psyche, a Honda 50 motorbike (€1,200-€1,800). Still popular today, the annual charity Nifty Fifty race at Mondello Park this year saw 46 teams compete on one of the most popular motorbikes of all time.

‘Silversmith to the stars’

The Adams’ At Home Sale on St Stephen’s Green, on June 30th, includes two lots of silver by Allan Adler, who became known as “silversmith to the stars” in 1950s’ California.

His clean designs with minimal ornamentation made him popular in the world of Hollywood, with Frank Sinatra, Barbara Stanwyck and Clarke Gable devoted collectors. One of his greatest accolades is said to be the commission he received by Convair Aviation Company to design a pin to be worn by the first seven astronauts chosen to travel to space. The sale features a set of six soup spoons (€500-€800) and butter knives (€400-€600).

Also featured are 11 porcelain figurines by Gardner, made in Moscow in the 19th century. Francis Gardner, an English banker settled in Russia in the mid-1700s and established the first private porcelain factory in Russia. Despite Empress Catherine the Great having her choice from the Imperial Porcelain Factory, whose work was solely produced for the Russian Imperial Court, she commissioned several pieces from Gardner, making these figures highly collectable(€1,000-€1,500).

The catalogue also lists an array of French boulle and inlaid marquetry pieces, in addition to some Indian silver, including a colonial trophy from the turn of the last century. See victormeeauctions.ie and adams.ie.