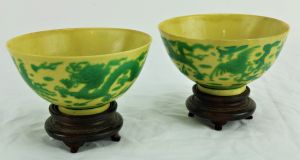 “I know all auctioneers say there is something for everyone, but this is certainly a true case in point,” says auctioneer George Fonsie Mealy, who has curated the sale from the estates of British textile designer Bernard Nevill, writer and explorer Erica de Bary, and art patron Garech Browne along with other important collections.

Some 300 lots are from the estate of Bernard Nevill, who revived the fortunes of Liberty of London in the 1960s and 1970s with is splashy fabric designs, taught at St Martin’s School of Art and had a remarkable influence on British fashion and decor for over half a century.The items are being sold in Ireland because one of his executors lives in Cork.

However, perhaps the most valuable lot - 1263, being Nevill’s complete personal design archive of fabric designs and drawings  - has  been withdrawn from the sale after a dramatic last minute bid to acquire it. The archive -which occupied an entire room at Mealys - was snapped up earlier this week by the Lady Helen Hamlyn Trust. Lady Hamlyn, widow of the wealthy publisher Paul Hamlyn, was a lifelong friend of Nevill's and plans to donate his archive to a UK institution in the coming weeks.

Nevill was an avid collector of art and antiques, if not a downright hoarder. His London home, West House in Chelsea, had 15 rooms crammed the 15 rooms with antiquities, and his country house, the stable block at the Fonthill Estate in Wiltshire was equally full of treasures. One of the rooms at West House was used as Uncle Monty’s London home in the 1987 cult classic Withnail and I, depicting walls layered in art and sofas smothered in exotic cushions. At the time the room was so crammed, the set designers had to move furniture out to make space for the three actors.

Items from Nevill’s house used in the film were sold at a major sale of his collection at Christie’s in 2011. This Irish sale includes a large selection of furniture and art from both houses in addition to fabrics, drawings, sample books and rugs.

Pieces from the estate of Erica de Bary also feature. De Bary and her husband Herbert visited Ireland as guests of writer Heinrich Böll, eventually buying in Leitrim where they set up home and an art studio.

Included is lot 1,436, the de Bary Ethnographical Collection, an extensive collection of artefacts and art – mostly African – from the 19th and 20th centuries. Mealy describes it as “the most important ethnographical collection to come to the market in Ireland” covering tribes from several African nations (€8,000-€10,000).

A unique Zodiac table, with intricate carving depicting the signs of the zodiac by Phillip Veit, is listed (lot 1,361, €7,000-€9.000). His principal work is the large fresco of the Introduction of Christianity into Germany by St Boniface, at Frankfurt Cathedral.

Silver from the vaults of the late Garech Browne include Georgian and Victorian pieces, along with a number of collectable wine, port and champagnes from the cellar of the Wicklow-based bon viveur.

Continuing with the theme of bon viveurs, lot 1,477 is a portrait of William III by the circle of Godfrey Kneller. The term “Dutch courage” is associated with this king, who introduced gin to Ireland and the UK in the late 17th century.

Items that may well attract international attention include lot 1,377, an old masters painting attributed to the circle of Anthony Van Dyck. “It was hanging over a fireplace in a bedroom in Ireland, and we knew from the frame that it was very old. However, when we looked at the back it had a Dublin exhibition label from 1872. It was previously owned by Mr JW Etshon Macartney, the bishop who was a noted collector of old masters, so it could well be an old masterpiece,” according to Mealy (€8,000-€12,000).

Lot 934, a pair of yellow ground, green enamelled Dragon bowls that were purchased in 1931 by an Irish family, may also attract international attention according to the auctioneer (€2,500-€3,500).

A lovely nude Adam and Eve by Gerard Dillon may well exceed its estimate of €3,500-€5,000, considering a world record was set for the artist at the recent Sotheby’s Irish art sale, where The Dreamer achieved over three times its lower estimate, selling for £378,000 (including fees). “We set the price for this piece well before Covid hit, so it could be one to watch,” advises Mealy.