Artist Damien Hirst is building a town - could an Irish artist follow?

Some remote places have been transformed by the input of artists, the latest being a town in Devon planned by Damien Hirst. Could Ireland have creative hubs of its own? 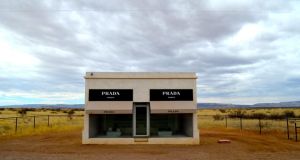 The fake Prada shop erected by Elmgreen and Dragset in the middle of the desert between Marfa and neighbouring Valentine. Photograph: Getty 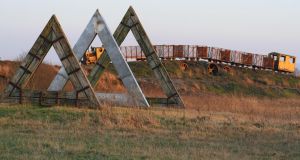 To get to Marfa, I flew to Dallas then on to El Paso, hired a car and drove four hours out into the New Mexico desert. There were cranberry farms, ranches, and occasional trains that seemed to be almost a mile long. The car radio played Christian tunes and carried adverts for guns. At one point I saw a sign, ahead in the distance. Closer to, it read “Garbage Can One Mile”, and sure enough, a mile on there was a bin. So why is Marfa, the tiny town in the middle of Texas-nowhere hitting the headlines for soaring property prices? Why are local residents concerned that they’re being priced and property taxed out of the market?

The answer is: an artist. Uber Minimalist Donald Judd moved to Marfa in 1971. Exacting and irascible, he had had running battles with museums and galleries about how to best show his aluminium and wooden box sculptures, and at Marfa he found a disused army base where he could permanently install some of his best work. Before he died in 1994, Judd bought up more Marfa real estate, creating large permanent displays for his own work, and that of his friends, including Dan Flavin and John Chamberlain.

Visitors followed: artists and art lovers. The Marfa Bookshop opened with the type of funky coffee shop attached that you might once have had to travel up to San Francisco for. And property values rose – in one instance, reported in the San Antonio Express-News, from $22,000 in 2000, to $60,850 in 2013, and doubling to $120,290 this year. It’s the type of gentrification many town planners could only dream about, although the nightmare side is that most of the property is bought as second homes, so schools are suffering and local services are stretched.

In 2005, Scandinavian art duo Elmgreen and Dragset, in a nod to the designer absurdity of it all, erected a fake Prada store in the middle of the desert between Marfa and neighbouring Valentine. You can still see it there, though it was vandalised (for the second time) in March.

Judd didn’t benefit financially from his input at Marfa, but his presence there ignited a social change and an accompanying rise in property values. The same thing happened in England, in the Cornish town of St Ives, where an artist colony eventually led to the opening of an outpost of the Tate (tate.org.uk). More recently Margate, on the Kent coast, has been “artified” as part of a process begun when Tracey Emin, who was brought up there, supported a regeneration scheme that included the opening of Turner Contemporary in 2011 (turnercontemporary.org). The gallery was named in honour of JMW Turner, who said the skies over the area were the “loveliest in all Europe”. (Irish artist Dorothy Cross had a major solo show at Turner Contemporary at the end of last year.)

So it was just a question of time until an artist decided to cut out the middle man and become a property developer in their own right. Enter, unsurprisingly, Damien Hirst. A brilliant businessman as much, in fact more, than a brilliant artist, Hirst has set his speculative sights on the Devon town of Ilfracombe.

Incorporating land from his own home, Winsham Farm, Hirst applied last December for planning permission to build an entire town on 187 acres of land. The plan, which includes 750 homes, a school, shops, health centre, offices and woodlands, and has already been nicknamed Hirst-on-Sea, has just been approved by North Devon Council. Although Hirst’s architect Mike Rundell quotes the artist as saying that he “has a horror of building anonymous, lifeless buildings,” and that “he wants these houses to be the kind of homes he would want to live in,” the plans published by the North Devon Journal actually look rather pedestrian.

That said, given that Hirst has already inflicted Verity, a 20m (67ft) tall bronze and stainless steel statue of a semi-eviscerated pregnant woman holding a sword aloft, on the town as a loan, it’s unlikely that he will be able to resist similarly branding what is currently being called the Southern Extension. He also has a restaurant, gallery and cafe in Ilfracombe and is working on a hotel project.

So is there anything similar afoot in Ireland? While it’s true that artists led the regeneration of Temple Bar, artist-led urban gentrification is nothing new. On the other hand, as brilliant arts centres, such as Carrick-on-Shannon’s The Dock (thedock.ie) add an extra layer of life to some of our country towns, is there anywhere, for good or ill, that could become another Marfa, Margate, St Ives or, indeed, Ilfracombe?

In Callan, Co Kilkenny, the former home of Tony O’Malley is now a residential artist’s studio in a scheme set up by O’Malley’s widow, Jane, who is also a highly respected painter, and administered by the Royal Hibernian Academy (rha.ie). Alongside this, art projects in Callan have included The Cowshed Collective and Commonage, the KCat studios, and the Abhainn Rí Festival.

In Carlow town, a much bigger venture is Visual (visualcarlow.ie). With 3,130sq m (33,691sq ft) of galleries, Visual also houses a theatre and café. Carlow is also home to the vibrant Éigse festival (carlowartsfestival.com) and while Visual, which opened in 2009, has a growing reputation for excellent exhibitions, there hasn’t been a “Marfa Effect” yet – though it should be noted that, in Marfa’s case, the process took time.

But to speculate on something completely out of the ordinary in Ireland, there’s a temptation to opt for Lough Boora Parklands. More or less midway between Tullamore and Birr, and down the road from Ferbane, Lough Boora is a huge cutaway bog. Like Marfa, it’s a place where the disconcertingly unworldly sense of being in an almost-alien (though incredibly beautiful) landscape, is enhanced by some astonishingly brilliant pieces of land art and sculptures, by Irish and international artists (sculptureintheparklands.com).

No, the journey there isn’t quite as epic as that to Marfa, but it’s got that art-bite that makes a place special; though whether Lough Boora, one of the loveliest places in Ireland, would want to become the arty heart of a major regeneration and gentrification programme, is another question.