Foot in the past: Advice for top toe health 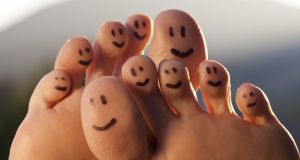 The Irish Times has always wanted readers to put their best foot forward, often advising on the treatment of corns, callouses, hammer toes and other podiatry issues.

However, the 19th-century message that most foot problems are caused by badly fitting shoes and boots, appears to have gone unheeded, as it has been regularly repeated in the 20th and 21st centuries.

In an 1881 lecture, Dr Stewart Woodhouse told the Ladies’ Sanitary Association that bootmakers, “backed by the fashionable world”, were attempting to straighten the sole’s natural curve, destroying its “elasticity”. The “numerous evil consequences” that followed included ingrowing nails, bunions, corns and overlying toes.

However, Dr Woodhouse had an even stronger objection to the fashion of: “heels, some two or two and a half inches in height… producing flat feet, weak ankles, and wasting of calf muscles”. The natural relation of the spine and hips was disturbed, he added, and the internal organs thrust from their natural position.

A correspondent who attended the International Health Exhibition in 1884 also criticised deforming fashionable footwear: “High shoe-heels tilt up the natural heel, so that the wearer is really walking on tiptoe, and the muscles of the leg are injured… Nothing can be so injurious to a growing girl’s foot as to put it in a shoe pointed at the toe, thereby turning the great toe inwards, and producing one of the greatest plagues of life: corns, or worse still, bunions.”

More than 40 years later the denunciations continued. According to Dr Leonard Williams in 1927: “One of the hygienic crimes that high heels perpetrated was that they made ankles thick.”

Another writer was more concerned about the temperature, rather than the girth, of ankles, purporting in a 1900 article that doctors held cold ankles responsible for killing more women “than nerves and disease put together”.

“‘Stock breeders say that cold can be borne by animals only at an expense of fat or muscle or warm vitality, and so it is with women,’ said a shoe dealer recently. ‘And yet they persist in wearing thin stockings and thin low-quartered shoes long after the summer has passed… When a woman comes in and buys a pair of low shoes in the cold season for outdoor wear we know that she is one of two things – vain or silly’.”

Earlier writers and advertisers were preoccupied with the dangers of cold feet. Wetton’s Magnetic Soles were promoted as one remedy to readers in 1885, who were also instructed by our reporter: “Wear two pairs of stockings made from different fabrics – one pair of cotton or silk, the other of wool – and the natural heat of the feet will be preserved if the feet are kept clean”.

Another health writer issued detailed instructions on this important, possibly life-saving, topic: “Draw off your stockings, when retiring at night, and rub your ankles and feet with a flesh brush or with your hand, as hard as you can bear the pressure, for 10 minutes, and you will never complain of cold feet in bed. It is hardly conceivable what a pleasurable glow such a rubbing will produce.

“Frequent bathing of the feet in the morning, and rubbing them thoroughly dry with a coarse linen or flannel cloth, is also very useful for this trouble. An extra sole in the boot or shoe is also desirable. If one is troubled with cold feet during the day it is an excellent plan to scatter red pepper (Cayenne) into the stockings, not letting it blister the feet, but only warm the skin. Cold feet, habitually is one of the sure avenues of death, and care should be taken to keep up a good circulation of the blood, both by rubbing and tonics.”

Advice on the treatment of corns remained much the same through the centuries; soaking, softening, paring, protecting. However, it is unlikely that any modern chiropodist would advise painting corns with an arsenic solution; applying candle tallow to blisters; rubbing iodine, lard or spermaceti ointment into bunions; or placing sore feet in a basin of soaked wood ashes.

In 1913 the cause of “feet that ache and hurt” was attributed to: “acid perspiration” which “literally eats though and decomposes the outer skin.” However, a sprinkle of synthated talc in the shoes every morning: “not only neutralises the acidity, but it also completely destroys the bad smell so frequently noticed in sweaty feet.”

Cutting the nails rounded instead of straight was one cause of hammer toes and bunions, explained the writer of Look To Your Feet in 1939 who maintained: “Nothing ages a woman more quickly than weary feet”, recommending a daily change of stockings and mustard foot baths.

In 1937 our health correspondent, who advised a post-bathing “rub over with methylated spirit or bath eau-de-cologne”, also warned that fallen arches could lead to cramps, aches, and callouses: “Walking becomes more difficult, headaches frequent and the nerves suffer.”

Shoe inserts were already popular in 1917 when O-pedica Foot Appliances were displayed at a “Great Foot Pain-Easing Demonstration”, and Dr Scholl’s “anterior metatarsal arch supports” made their first advertised appearance in 1918.

Trenchfoot, sometimes euphemistically referred to as “foot trouble”, was a huge health concern for the soldiers of the first World War and Reudel Bath Saltrates honed in on this problem in a 1916 advertorial: “A soldier home on leave from the front was recently describing how he cured the distressing foot tortures so often inseparable from service in the trenches. He stopped all his suffering and constant misery by simply resting his feet occasionally in hot water containing common saltrates.”

The second World War brought a new kind of foot trouble from the US, with the introduction of the jitterbug to dance halls. “Foot muscles are apt to become bunched and knotted from the incessant strain of this kind of dancing,” explained our disapproving reporter in 1944. A New York specialist, however, had invented a special exerciser “to cure the muscles in the shortest possible time… Patients will stand shoeless on the hinged pedals, one for each foot, of the apparatus, which is equipped to preserve balance.

“As the patient shifts his or her weight, under instructions, the pedals rock backwards and forwards, flexing and stretching the muscles, so that after a few days it will be possible to start jitterbugging again, unless, of course, the boy or girl has come to realise what an appalling picture he or she presents during the leg and arm flinging which seems to constitute this newest form of dancing.”