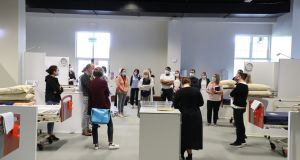 It’s quite a surreal experience visiting the empty “field hospital” in the former convention centre at Citywest on the outskirts of Dublin.

Built by the army early in 2020 and kitted out with 300 hospital beds for treatment of Covid-19 patients when acute hospitals reached their maximum numbers [which they never did], the facility – with its huge floor plan and tiered balcony seats – looks more like a film-set when we visit.

However, this “film-set” is now transformed into a pop-up allergy clinic operating in the weeks before the HSE plans to decommission the facility in mid-October.

Families whose children have been on waiting lists – some for up to four years – at Cork University Hospital and Crumlin Children’s Hospital (now Children’s Hospital Ireland at Crumlin) are coming to do food challenge tests to check if they experience an allergic reaction to foods they have previously had concerns about.

Prof Jonathan Hourihane, professor of paediatrics at the Royal College of Surgeons and consultant paediatrician at Children’s Hospital Ireland (CHI) at Temple Street, says this is a great opportunity to reduce waiting lists with up to 2,000 children across the two allergy clinics in Ireland. Back at their regular clinics, paediatricians who specialise in allergy can usually only carry out about four food challenges a week.

This food challenge is the definitive test

“These children have been lower down the priority list in children’s hospitals [because they are healthy and well]. The children we will see will all have had an allergic reaction – from minor hives to anaphylaxis – to some food and this food challenge is the definitive test to see if they are still allergic to that food,” explains Prof Hourihane who set up Ireland’s first allergy clinic at University Hospital Cork in 2005. An allergy clinic was subsequently set up at Crumlin Children’s Hospital in 2014.

Children aged 4 to 16 have been invited to attend the pop-up allergy clinic where their reaction or lack of reaction to potentially allergic foods such as various nuts, shellfish, kiwi, eggs, milk, sesame seeds will be supervised by allergy specialists. Clinicians are on hand to deal with any possible anaphylactic reaction and there is a resuscitation bay in the unlikely event that a child needs emergency treatment from anaesthetists.

“The food challenge test will offer huge relief to anxious families,” says Niamh Flynn, one of the paediatric clinical nurse specialists in allergy who will be dealing with families who come to the Citywest pop-up allergy clinic. The clinic is set up to see about 27 children each day over six weeks.

“We expect about 50 per cent of the children who come will have an allergic reaction to the food and we want to show them that it’s not fatal. A lot of allergies go away and children can eat food safely here to see if they still are allergic or not,” explains Prof Hourihane.

He says many children who are allergic to one food avoid other foods too.

“Half of the children we will see will pass the challenge for the other foods they are avoiding. We want to reduce the foods they are avoiding to one food if possible. For example, a child with a peanut allergy might also avoid other nuts, shellfish and fish or a child that reacted to milk, might avoid, egg, shellfish, wheat and apples,” he explains.

Prof Hourihane says many children are also carrying epipens [epinephrine auto-injectors] unnecessarily while they await a professional review of their allergies. “Studies have shown that half of children who carried epipens were only allergic to milk or eggs and not peanuts,” he explains.

Dr Aideen Byrne, allergy consultant at CHI at Crumlin says the facility at Citywest is an alternative way to deal with elective treatments in a space that allows social distancing.

“This study explained that a peanut allergy could be avoided in children at high risk of developing an allergy already (for example those with severe eczema or an allergy to eggs) by introducing small quantities of peanuts three times a week,” explains Dr Byrne. Subsequently, the recommendation was extended to all food allergens.

“Young Irish parents are beginning to hear this message that the introduction of [potentially allergenic] foods at a young age is the best way to avoid food allergies and the key point is that public health nurses and GPs offering weaning advice educate parents on this,” says Dr Byrne. “It’s more about the prevention of allergies and less about focusing on the fear of allergies,” she adds.

Mairead Sheehan, paediatric clinical nurse specialist in allergy at CHI at Crumlin says familes are given a lot of information and support before they attend the clinic.

“We guide them towards the Irish Food Allergy Network as food allergies differ in various parts of the world. And we explain how the introduction of a diversity of foods at weaning age will prevent sensitization towards certain foods.”

Susie D’Alessandro brought her daughter, Arianna (9), to the pop-up allergy clinic in Citywest after waiting three years for an appointment at Crumlin Children’s Hospital.

“Arianna had a rash from eating peanut butter on toast when she was two and a half. It was confirmed as a peanut allergy, but she isn’t allergic to other nuts. We’ve had skin prick tests a few times since, but never a food challenge,” explains D’Alessandro.

Arriving from their home in Co Kilkenny for a 7.30am appointment, Arianna sampled increasing amounts of peanut butter – then peanuts themselves in 15-minute intervals while the medical team checked her pulse, breathing and skin after each “food challenge”.

“It was nerve-wracking when you consider that for the last seven years we have been avoiding peanuts in the house and I couldn’t let her go to other houses for fear of her having a serious reaction if she ate something with peanuts in it,” she adds.

However, Arianna came out all clear on her food challenges, no longer allergic to peanuts. “I felt elated. It is such a weight off the whole family,” says D’Alessandro, who has three other children. Now, the D’Alessandro family has to re-adjust to incorporating peanuts back into their diets. “Arianna has to have peanuts at least three times a week to build up her tolerance to them again so we’ll be having lots of things with peanuts,” says her mother.

Debbie Moriarty brought her son, Senan (10), for a food challenge test following a wait of two years at Crumlin Children’s Hospital. Having had an anaphylactic reaction to peanuts, Senan is also allergic to beans, fish, eggs and some other nuts. He went to the pop-up allergy clinic at Citywest to do a food challenge on almonds following a low level reaction to almonds on skin prick tests.

“We avoid all nuts in our house and since almonds showed up as the least dangerous on a skin prick test and Senan likes curries, it seems the right nut to test for,” explains Debbie Moriarty. Starting with tiny amounts of almond, Senan was progressively given more almonds every 20 minutes while the medical team checked his reaction. “He was very anxious but they re-assured him that even if he had a tickle in his toe, they would stop. He ate 17 almonds in total and didn’t have a reaction. He was also monitored for 90 minutes after the last food.”

Back home after being given the all-clear to eat almonds again, the family had homemade almond slices. Next time, he hopes to check out his tolerance to cashew nuts.

‘My sister preys on people’s weaknesses, and causes nothing but trouble’
10