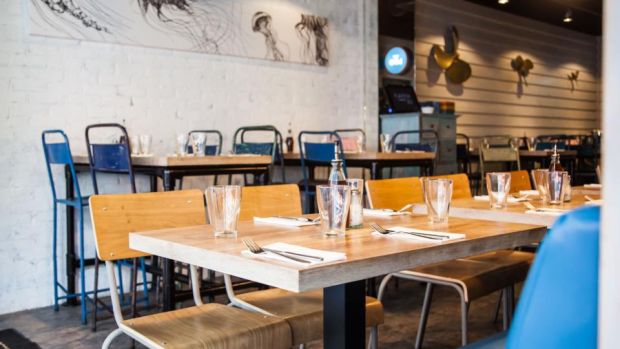 So good fish restaurants are like buses in this town. You wait an age, then three trundle up in succession. First came the jewel of Queen Street that is Fish Shop, next teeny seafood shack Klaw in Temple Bar, and now Catch 22. At long last in this city by the sea, fish is having its moment.

Catch 22 is beside La Cave on South Anne Street, just off Dublin’s Grafton Street. Before it was this, it was a Burritos and Blues. Before that an Abrakebabra. It’s a building that’s making its way up the food chain, one posher bite at a time.

There is a catch (sorry). They don’t take bookings for two. To be sure of a table you need to be a party of at least five. It’s a bit of a headscratcher of a minimum, but that’s house policy. Towards the end of our meal, there’s a smallish queue forming, which is so 2006.

The most important person in a fish restaurant is the one who’s buying the supplies. Do it well and your chefs just have to know how not to mess it up. By the looks of things here, they’ve figured that out, apart from one dish which needs to be thrown overboard immediately.

My dining companion is a friend who recently replied “you’re looking at her, chicken,” to the Uber driver who asked “where’s the bride?” on their way to the Registry Office. He approves of our window seat for its people watching potential, like the “two old married queens” that we are.

Behind us the restaurant decor has ticked the bleached timber walls and polished concrete floor boxes, although both are cover versions of the look. The floor is tiled. The walls are lined with a sort of bleached timber laminate. Brass boat propeller blades on the wall lead your eye to the kitchen. There’s a nice photograph of a paint-peeling fishing boat on a beach. Decor wise, it’s a bit like a carton of that low sodium salt stuff – it’s not convincing me of its saltiness.

But when we get an enamel mug (natch) of whitebait, concerns that this is slick over substance are washed away. The teeny whole fish are an unasked for snack that everyone seems to be getting. So not critic bait.

They’ve been fried in a nicely light gritty polenta crumb, so you can still see their silvery sheen through the outer crispy layer, and there’s a good lemon mayo for dipping. Our small shoal disappears quickly.

Things are going swimmingly till the fish cakes arrive. On a non-working night I’d steer a wide course away from fish cakes, but I reckon they’re a good test of a kitchen.

In this case they’d be better described as potato cakes flavoured with smoked fish. And they’re clad in a kind of spice burger crumb that time forgot.

But get a load of these babies beside me. Plump, pale mussels sitting in a broth of creamy lemonness: the best mussels I’ve eaten in a restaurant. I end up snaffling a good third of the pot.

They’re beautifully cooked, still soft, with none of the chewiness that can happen if they’re overcooked for even minutes. There’s good ciabatta to mop up the liquor and a soup spoon as a great last measure to finish off the shellfishy, lemony cream down to the last drop.

Then there are two plates of fried fish. My mackerel has been fried so its skin is crisp as a fresh Tayto, with just enough butter to sweeten it without swamping it in greasiness. There isn’t as much as an eyelash-sized bone left in the flesh. It is a masterclass in how to source, pin-bone, cook and serve mackerel. Some crisp sweet potato chips do it justice.

That day’s special, plaice, has been lightly fried and then topped with shrimp and a samphire butter, with the sea vegetable still bright green and pleasingly crunchy.

The tarte tatin is a little lumpen. I’m a fan of the thinly sliced apple where the corners have gotten caramelised and crispy. Here, it’s a wodge of decent but undifferentiated apple on pastry. Aunt Libby’s Tollhouse pie turns out to be a diner classic of chocolate pecan pie, expertly done and swiftly eaten.

So Catch 22 is a find, a place that delivers on the luscious food picture on its website (a ‘you had me at hello’ shot of a pot of mussels). You might have to queue for a table, but steer clear of the fish cakes and you’ll be glad you did.

Dinner for two with three glasses of pinot grigio and a peppermint tea came to €84.