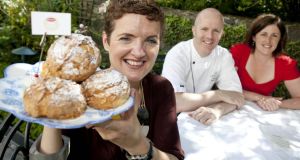 The source of Ireland’s best scone was revealed yesterday – and surprisingly, it’s not my mother’s kitchen. The annual Goodall’s challenge is open to the makers of scones sold in cafes, restaurants and B&Bs, and this year’s winner is pastry chef Mary Pyke for her pear and almond scones sold at Niamh’s Café in Clonmel, Co Tipperary. Following nominations from the public, a shortlist of 10 finalists was drawn up and voting was divided equally between a public vote and assessment by a panel of judges including Paul Kelly, executive pastry chef at The Merrion Hotel, Richie Fenner, owner of Caffé Formenti which won last year’s competition, and baking blogger Rosanne Hewitt of likemamusedtobake.com. Niamh’s Café is owned by sisters Niamh and Paula Dwan, and Mary Pyke has worked there for 12 years. The winners received a €1,000 cash prize.