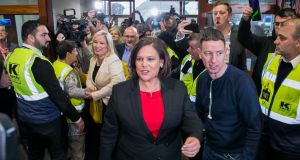 Sinn Féin looks poised to win at least 10 extra seats in the 33rd Dáil as it benefits from a dramatic surge in support from voters in the general election.

While it remains unclear whether it will ultimately be part of any future coalition, the support gained by Mary Lou McDonald’s party has sent shockwaves across the Irish political landscape.

As counting continues in the 39 constituencies, Ms McDonald said she has been in touch with the Greens, Social Democrats and People Before Profit to arrange government formation talks.

Speaking at the RDS on Sunday, she said she wants to explore whether such a new government would be possible.

Live updates from the counts are available on our Election 2020 live blog.

Ms McDonald, who was re-elected on Sunday evening, said it was “not sustainable” for either Fine Gael leader Leo Varadkar or Fianna Fáil leader Micheál Martin “to say they will not speak to us, representatives of such a sizeable section of the Irish electorate”.

She said she was not shocked by the countrywide surge in support and acknowledged that the party should have fielded more candidates.

The party’s housing spokesman, Eoin Ó Broin, later said housing was one of the biggest issues on doorsteps around the country and was a major contributor to the success of Sinn Féin in the election.

Despite its surge, the odds remain against Sinn Féin emerging with the most seats, primarily because it ran significantly fewer candidates than its two main rivals – 42 compared with Fianna Fáil’s 84 and Fine Gael’s 82.

On Sunday Taoiseach Leo Varadkar, who was elected on the fifth count in Dublin West, said he will not be speaking to Sinn Féin with a view to forming a coalition after the election. Speaking at his count centre in Dublin, he said Fine Gael was “not compatible with Sinn Féin”.

Congratulating Ms McDonald and her party on their success, he said they had done very well “but bear in mind we have roughly three parties that got roughly the same share of the vote . . . and everyone’s mandate needs to be respected”.

He said “nobody can be forced into some sort of forced marriage or forced coalition”.

To form a government together “you need to have roughly the same views around the courts of the criminal justice system, around how the economy and society should be run and also how democracy should function and that’s what makes my party Fine Gael not compatible with Sinn Féin”.

Outgoing Minister for Finance Paschal Donohoe said he was “very satisfied” with Fine Gael’s performance in the election. He said the party was still aiming to enter government. Outgoing Tánaiste Simon Coveney echoed those comments, adding: “I think Ireland needs a government that has the majority, that can make decisions, that can make things happen quickly and responding to what the electorate are looking for from government.”

He later added: “I always said our priority is to form a government that doesn’t involve Fianna Fáil or Sinn Féin – clearly the numbers don’t look like that is going to be possible so we are going to have to see how discussions develop.”

Outgoing Minister for Health Simon Harris said Fine Gael is still willing to talk about a grand coalition with Fianna Fáil, “as a last resort, in the national interest”.

Mr Martin, who was elected on the sixth count in Cork South-Central, refused to be drawn on the possibility that Fianna Fáil would enter into coalition with Sinn Féin, though he did stress all political parties would have to listen to what the electorate have said.

However, speaking to RTÉ Raidió na Gaeltachta, Fianna Fáil director of elections in Donegal Brendan Byrne said that the party must have an internal debate about going into government with Sinn Féin.

Sinn Féin’s Donnchadh Ó Laoghaire was the first elected TD of the 33rd Dáil. He topped the poll in Cork South-Central with 14,057 votes, beating Mr Martin and Mr Coveney. On Sunday night Galway East was the first constituency with all seats filled.

Counting of votes cast in Saturday’s ballot began at 9am on Sunday. Some centres began suspending their counts for the night at about 10pm that night.

Tallies indicate that Sinn Féin can make gains in 12 constituencies, with the possibility of gaining seats in one or two more. That will take its Dáil representation to beyond 30 seats for the first time, a historic high for the party.

In contrast, both Fine Gael and Fianna Fáil are unlikely to make any material gains. The prospects of any combination of parties reaching a majority of 80 seats to form a government now looks remote, unless there are fundamental shifts in terms of declared positions on coalition partners.

An illustration of the level of Sinn Féin’s support has been the huge personal votes amassed by key party figures including Ms McDonald, David Cullinane, Pearse Doherty, Dessie Ellis, and Aengus Ó Snodaigh, all of whom received between 1½ and two quotas each. Party strategists have said if it had run second candidates in some constituencies its total would have reached 40.

Among the well-known figures who have already lost their seats is Minister for Transport Shane Ross, who was eliminated from the count in Dublin Rathdown. Mr Ross said he didn’t attribute the result to his performance as Minister for Transport, but rather the “volatility” of the Rathdown electorate. Fine Gael Minister for Social Protection Regina Doherty lost her seat in Meath East.

Sinn Féin made an unexpected gain in Wexford and also in Mayo with the election of Rose Conway-Walsh, who became the first Sinn Féin candidate to be elected to the Dáil there since 1927. According to the tallies, the party could make further surprise gains in constituencies including Tipperary; Roscommon-Galway, and both Kildare constituencies.

An Ipsos MRBI exit poll published on Saturday night had indicated Fianna Fáil, Fine Gael and Sinn Féin were set for an extraordinary tie in their share of the vote.

The poll was taken on Saturday at 250 locations across the State, among 5,376 respondents who had just voted. It has a margin of error of 1.3 per cent.

The uncertainty created by the exit poll had thrown up the possibility of another general election being necessary.

There will be live coverage of the count over the next few days on irishtimes.com with our liveblog, podcasts and analysis as well as up to the minute results from all constituencies. Additional reporting: PA/Reuters