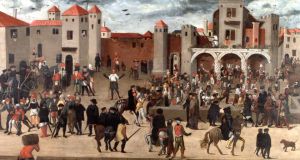 From the exhibition Revealing the African Presence in Renaissance Europe: a detail of Chafariz del Rey, in the Alfama district of Lisbon, from about 1570-80. Photograph: Berardo Collection 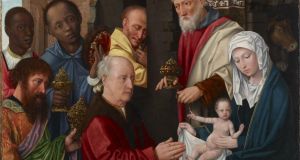 From the exhibition Revealing the African Presence in Renaissance Europe: a detail of Adoration of the Magi, from the workshop of Gerard David in about 1514. Photograph: Princeton University Art Museum

Both the title of the fine little portrait and the name of the painter lead you to expect a standard Renaissance image. It is captioned Portrait of Duke Alessandro de’Medici by Bronzino, one of the leading painters active in mid 16th- century Florence. Alessandro, as his name and title suggest, ruled that city-state, rather tyrannically, until his assassination, in 1537. But there is something utterly startling about the painting: Alessandro is clearly what we would call “black”. His kinky hair, his full lips, and his dark skin all signify, to us, an African ancestry. And indeed, according to one contemporary source, Alessandro was “born of a really vile slave” – probably to one of the Medici popes, Clement VII.

The portrait is part of one of the most eye-opening exhibitions I’ve seen for a long time, Revealing the African Presence in Renaissance Europe , created by the Walters Art Museum in Baltimore and currently at Princeton University Art Museum. It brings together 65 paintings, sculptures, ceramics, maps and other objects from western Europe between 1480 and 1610 with the unapologetic aim of making a point.

And quite a remarkable point it is too: that Africans were not just present in this crucial cockpit of European culture but present in a hitherto underestimated variety of ways. You can never quite think of Renaissance Europe in the same way after seeing it.

It is no great surprise that black people, especially black children, appear in artistocratic portraits like Titian’s gorgeous Portrait of Laura dei Dianti , where the brightly dressed black page sets off the exoticism of the subject’s hat. Having a black child servant was fashionable – a letter from Isabella d’Este in 1491 orders the supply of a little girl “as black as possible” – and the point of such wealth was to be displayed. Nor is it surprising to see black galley slaves adorning sculptures of powerful magnates. What does amaze, though, is the sheer variety of images of Africans as real human beings.

There is, for example, an astounding picture of life in a waterfront square in Lisbon in the late 16th century. It is not a good painting and the artist is unknown, but the content of the image challenges all assumptions about what a southern European city looks like at this time. About half the people in the picture are black. Some – women carrying pots on their heads – could be seen as domestic slaves, though they may just be ordinary poor inhabitants. There’s a black man who’s clearly drunk and is being carted off by the town watch. But there’s also a black man with a sword – which means he is clearly free. Riding along, on a luxuriously bedecked horse, is a man in armour with the insignia of knighthood – he, too, is black. And even more surprisingly, in the background, blacks and whites, men and women, are dancing together. There’s no sense that the painter wishes to show all of this as anything other than an image of the city’s cosmopolitan bustle.

None of this means that racial prejudice is absent or that “blackness” is not associated with all that is not, in every sense, “fair”. But these prejudices operate much less consistently in this period than in later western culture. There are many opportunities for painters to depict African men respectfully. Some of these are in religious iconography. One or more of the Magi who come to adore the infant Christ are often depicted as black men. The legend of St Maurice, a black African Roman legionary and Christian martyr, creates another opportunity for positive imagery.

What’s especially interesting is that these depictions are in many cases based on living African models, so we get highly individual portraits of real black men living in southern Europe. Ethiopian pilgrims (some of whom are depicted in carvings on the central door of St Peter’s in Rome) and ambassadors from Congo (shown wearing their wonderful nose and ear-rings) are also shown as formidable figures.

But even in relation to ordinary black people living in Europe, there is a pure artistic interest in painting vivid, personal and therefore fully human portraits. Black skin is itself of interest to the artists: Albrecht Durer made a fabulous drawing of “Katharina”, an obviously African woman, to which his delight in creating the illusion of the sheen of her skin gives a special beauty.

Dark bronze could be used to represent black bodies, as in Orazio Mochi’s sculpture of, of all people, a black court jester. In Annibale Carracci’s Portrait of a Black Slave Woman , the woman in question, beautifully dressed and coiffed and entirely self-possessed, holds our gaze
with an expression that is anything but slavish.

As well as their fascination, these images also create a certain sadness. They don’t just reveal a black presence in western Europe that is older and deeper than is generally imagined. They reveal a European culture that is still, at that point, capable of representing that presence in rich, complex and humane ways. In forcing us to reflect on how that presence was forgotten, they force us also to regret the loss in subsequent centuries of that very capacity.