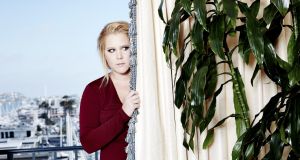 What did I learn from the arts this year? That art in the name of protest and advocacy is not just powerful but beautiful, too. Artists expressed themselves in 2015 on marriage equality, women’s reproductive rights and gender equality on placards and memes, on the walls of our towns and cities, on the badges on our lapels, and in DIY spaces.

The street art that emerged around the marriage referendum coloured not just walls and doorways but also conversations. Niall Sweeney shared his design expertise with downloadable and shareable templates and logos, which culminated in a giant Yes wrapped around the outside of Pantibar.

Joe Caslin’s stunning murals on a gable wall on Dame Street and a castle in the west of Ireland made the front page of the International New York Times.

Sums’s rainbow fist on the front of Project Arts Centre was one of the most photographed installations. Maser repainted his U Are Alive piece off Camden Street in rainbow colours. Will St Leger’s #WallsOfEquality project included beautiful pieces by ADW, Jess Tobin, Morgan and others.

Emma Blake thanked voters by leaving free pieces around the city, including wooden heart carvings proclaiming “Love Prevails” and canvasses stencilled with “Cheers” and “Nice One”. Around the capital, businesses and shops painted their windows. It was a grassroots and DIY artistic campaign like nothing we’d seen before.

In producing and performing at spoken-word events I’ve learned that the form often acts as a first responder to social issues. As the conversation about women’s reproductive rights heightened, that topic was evident at spoken-word events. On the eve of the March for Choice the Pettycash collective hosted a night of poetry and performance at the Barricade Inn, on Parnell Street, a squatted anarchist social centre.

At an event myself and my creative partner Vickey Curtis produced for the Bram Stoker Festival, I Got the Seanchaí, I Got the Secret, the Homework Collective, whom Vickey first saw perform after the March for Choice, staged a bold and stark piece about abortion in the form of a responsorial psalm.

During the Rose of Tralee festival Speaking of Imelda, the direct-action feminist performance group, hosted their own Rogue Rose of Tralee, flipping the archaic contest on its head to make a political and personal point.

In the latter part of the year the Waking the Feminists movement grew out of protest at the Abbey Theatre’s Waking the Nation programme for 2016. Actors, producers, designers, directors, other theatremakers, and arts managers joined forces to push a message about equality in the arts.

It culminated in a unique and electric takeover of the Abbey’s stage, a rally that reverberated around the theatre industry and beyond. The people have the power.

The Grangegorman squat: One of the most interesting cultural spaces in the city closed this year, unfortunately, but the impact it had on Dublin’s DIY creative landscape will be long-lasting.

Girl in a Band: In a top year for women’s music memoirs, Kim Gordon’s book was essential.

Homework Collective: A brilliant bunch of women whose performances are searingly political.

The Queen of Ireland: Conor Horgan’s excellent documentary on Panti Bliss released in the aftermath of the marriage-equality referendum.

#WakingTheFeminists at the Abbey Theatre: The most essential cultural conversation to happen in Ireland this year.