TV preview: Six shows to watch on television this week 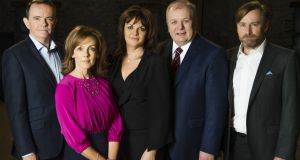 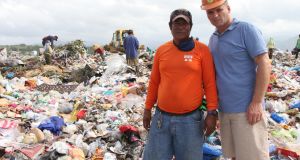 Mark Crosbie atop a Manila landfill in Toughest Place to Be (Monday, RTÉ One, 9.35pm).

The dragons are back! No, we’re not talking about the new series of Game of Thrones (that’s not until next week). We’re talking about the scarier variety of fire-breathing creatures, in the new series of Dragons’ Den . A fresh crop of entrepreneurs will brave the den and attempt to impress dragons Gavin Duffy, Barry O’Sullivan and Eamonn Quinn with their business ideas and wrest some cash out of their claws. They’ll have two new dragons to deal with: Alison Cowzer, co-founder of biscuit maker East Coast Bakehouse (a tough cookie – don’t bring any half-baked ideas), and Eleanor McEvoy, chief executive of Northern Irish electricity provider Budget Energy (your presentation had better be electrifying or she might pull the plug). The seventh series will showcase start-up ideas from food to fashion, fitness and education, and will feature more women entrepreneurs than any previous series.

Toughest Place to Be
Monday, RTÉ One, 9.35pm
Who’d leave a cushy job in Dublin to clean the filthy streets of Manila? Street sweeper Mark Crosbie takes on the challenge in Toughest Place to Be , swapping his regular beat in Grafton Street and Temple Bar for an eight-day stint in one of the world’s most polluted and densely populated cities. Local sweeper Mel shows Mark the ropes, but the Irishman is ill-prepared for the sheer poverty he encounters in the Philippine capital, where people scavenge the city’s landfills to survive.

Later. . . Live with Jools Holland
Tuesday, BBC Two, 10pm
No one can cook up a live music session better than Jools Holland, who has a smorgasbord of stars lined up for the new series of Later. . . Live with Jools Holland. As usual, the live shows are followed by the full-length versions on Friday. The first programme features Paul Simon, performing a song from his new album Stranger to Stranger, along with a classic; Laura Mvula, whose second album, The Dreaming Room, sees her working with Nile Rodgers; former Drive-By Trucker Jason Isbell; and late-blooming soul singer Charles Bradley, who released his debut album in his late 60s.

Pixie’s Sex Clinic
Tuesday, RTÉ Two, 9.55pm
No talking about sex, please, we’re Irish. As a nation, we’re generally uncomfortable about openly discussing sex, but Dr Pixie McKenna wants to change all that in Pixie’s Sex Clinic. Telly GP McKenna will be inviting young Irish people to talk about sex and sexuality, in a lively and irreverent format that includes a sex confession booth, sexy stand-up comedy and a sex quiz that pits kids against their parents to see who knows more about the birds and the bees. A team of sexperts will also be on hand to answer questions. The first episode explores the touchy subjects of sexually-transmitted diseases, contraception and consent.

How To Cook Well with Rory O’Connell
Wednesday, RTÉ One, 7.30pm
If you get to the stage of cooking dinner for your date, you want to make sure you can rustle up something that won’t spoil the dessert. Happily, there’s a new series of How To Cook Well with Rory O’Connell to help you hone your kitchen devilry. The Ballymaloe co-founder is back to impart his culinary wisdom to help you come up with some tempting ideas for your dinner guest.

First Dates Ireland
Thursday, RTÉ Two, 9.30pm
Imagine going on a first date and having every moment filmed from every angle and broadcast on national television. Sounds like a passion killer, but the presence of TV cameras doesn’t deter the hopeful romantics looking for love in the new series of First Dates Ireland. Singletons share meals at a restaurant (Coda Eatery in Dublin’s Gibson Hotel), and we watch to see if love blossoms. The guests don’t mind that their every move and chat-up line is being recorded, but will we mind being a fly on the wall at this dinner party for two?

Don’t dip your pen in someone else’s blood: writers and ‘the other’
4