Television: A look back at the great drama on TV in 2013 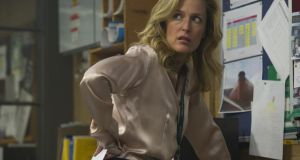 When it comes to a look back over the year’s TV, the only way I can sort through the sheer volume of programmes is to think of the ones I never miss for their ability to entertain and for the creativity and smarts of their makers. This was the year of the drama, when top-quality acting, writing and production values became the norm. It’s the trickle-down Sopranos effect, which demands that TV drama be as good as or better than anything you see at the cinema.

The choice of quality dramas was ammunition against harrumphing bores who moan about there being nothing on the telly.

There were two gripping crime series. The Fall (BBC/RTÉ) was brilliant. Gillian Anderson, channelling Helen Mirren in Prime Suspect, played the top cop on the hunt for a serial killer (a 50 shades of scary Jamie Dornan) in a Belfast where sectarian tensions were a by-the-way backdrop to normal, complicated living. Maybe there were too many coincidences and the resolution seemed too primed for series two, but it was tense, quality stuff. The same for Broadchurch (UTV), an atmospheric, moody police procedural – and not just because David Tennant was the lead. It also starred Olivia Colman and held tightly to the secret of whodunnit until the final gripping episode.

British drama-makers mostly seemed obsessed with bustles and sideburns. The number of dramas set in the 19th century suggested an unhealthy fixation, and whether or not you liked The Village, The Paradise, Mr Selfridge, Peaky Blinders (all BBC) and The Suspicions of Mr Whicher (UTV), they’re undeniably quality dramas. Well, maybe not the bloody Victorian gorefest Ripper Street, which was never coy about the details of its grisly murders of women. (In general there was far too much of that on screen; I meant to keep a body count this year but gave up around February, as there were so many.)

We had two series in one year of the most compelling, intelligent and challenging political dramas on TV – it’s a surprisingly crowded field – the Danish-made Borgen (BBC Four). Birgitte Nyborg (Sidse Babett Knudsen) is the most recognisable, three-dimensional female character in TV drama, and series three, which finished this month and saw Nyborg setting up her own party, was even better than the second.

It worked through several themes, from the challenges of being a single working mother to the dumbing-down of current- affairs TV. Borgen is so confident of its audience that it risked an entire episode on pig farming in Denmark – and even that was worth the hour of subtitles.

Who’d have thought anyone could warm to a moody French zombie thriller in which people spoke short sentences through a fog of cigarette smoke? But The Returned (Channel 4) was superb, episode building on its tantalising and mysterious storyline.

Still with subtitles, The Tunnel, the Sky-made adaptation of the Scandi hit, transposed the action to France and Britain. It was an unusual thing: a remake of a hit series that was as good as, and maybe even more nuanced than, the original.

It was the year that binge watching entered my TV world, and not that clunky business of fishing discs out of box sets but video on demand through streaming service Netflix. It upped the ante for blockbuster, intelligent, classy TV drama with the unmissable, funny, moving and downright dirty Orange Is the New Black; the final, thrilling series of Breaking Bad, in which Mr Chips truly became Scarface; and House of Cards, staring Kevin Spacey as a scheming, amoral, power-hungry US politician. House of Cards won an Emmy this year, making it an award-winning TV series that was never actually on TV – the clearest sign yet of how viewing habits are set to radically change and never go back to being tied to a schedule.

Drama is notoriously expensive: each episode of House of Cards cost $3 million. This probably accounts for RTÉ’s minimal drama output, which included Raw, a shadow of its quick-fire, good-looking original self that limped through its final season, and the fourth series of Love/Hate, which must have hoovered up much of the drama budget. Although its underdeveloped script, repetitive scenes and weak plot made for unsatisfying viewing, the unprecedented hype around it delivered a huge audience.

The RTÉ acquisition team bought well, though, particularly by keeping the faith with Homeland, which defied all predications and sharpened up midseason to get back to its Brody-dominated roots, pulling itself back from the brink of being boring and ridiculous. Other excellent buy-ins included The Americans, the cold-war spy series, and the 1950s-set Masters of Sex, the explicit Mad Men-without-the-Martinis bioseries about William Masters and Virginia Johnson.

RTÉ’s investigations unit returned to confident full strength. In May, it delivered the powerful documentary about poor standards in childcare A Breach of Trust, whose findings shocked parents and cast a spotlight on the sector and the lax legislation that covers it.

There were strong factual and lifestyle series and programmes on RTÉ, including The Family Project, Looking after Number One, Inside Irish Nationwide, Life on the Inside, Simply AmDram and The Scholarship – a well-made mix reflecting and capturing slices of Irish life.

Armando Iannucci’s unfailingly hilarious take on US politics, Veep (Sky Atlantic), starring the comic supremo Julia Louis-Dreyfus, gets my vote for funniest series of the year, but there were homegrown laughs too. On the Couch (TV3), a low-budget comedy series created by Barbara Bergin and Gary Cooke, wickedly explored relationships in crisis, and the polished, clever and sharp-witted Irish Pictorial Weekly (RTÉ) delivered quick-fire sketches fuelled with biting satire on the state of the economy, our blundering politicians and took a few swipes at the media. Heading into 2014, Barry Murphy and his ensemble cast and team of writers will have no shortage of material.