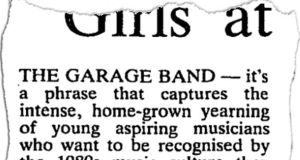 The garage band – it’s a phrase that captures the intense, home-grown yearning of young aspiring musicians who want to be recognised by the 1980s music culture they identify with. Playing music in the “garage,” in nowheresville, forming a sound, an image, working towards playing in small clubs, recording a demo tape, are part of a lifestyle that few Irish women were part of until recently.

Ireland has produced the two most compelling international figures in 1980s rock culture, Bono of U2 and Bob Geldof. But an Irish woman is yet to make a similar impact.

From total anonymity to successful self-employment in the high-profile music business – it’s a new kind of Cinderella story for both young Irish men and women. And Prince Charming is a record company executive with a recording contract up his sleeve who says, “come out of the garage and into the limelight.”

Sinead O’Connor (19), who leads her own band, “Sinead”, really isn’t a garage girl anymore. She has just recorded a single with the Edge, of U2, and her first album will be released in January on Ensign Records. She lives in her own apartment in London and looks back on the day she “did a bunk,” at 17, ran away from Newtown School in Waterford, disappeared into Dun Laoghaire and embarked on her life, with not a little satisfaction. (After all, look what happened).

Skinhead hair-style, sweet Laura Ashley dress, aggressive Doc Marten boots, round innocent looking eyes and all, she says “I’m a real schizophrenic . . . I like to contrast five or six elements of one person in me . . . I have a skinhead, but I’m not a skinhead. I have the haircut because it makes me feel clear; it makes me feel good. I like to say, ‘I’m not a man or a woman – I’m Sinead O’Connor.’ ”

Maureen Kelly says that she doesn’t want “to put across a sexy image of a soft woman with a hard guitar.” Her role models are Chrissie Hynde, Suzi Quatro and Annie Lennox – all strong women who, she feels, have displayed powerful, individual identities: “Annie Lennox – I just love the image she puts across. She’s very much in charge, she looks wonderful, she puts her voice across wonderfully.”

Maureen is confident that she and The Classics will get that all-transforming record deal and she feels they are moving towards it step by step: “Each time we do a gig it’s like doing an interview for a job, you want to get promoted almost.”

Songwriter and singer Ed Darragh (27), probably knows more about being promoted in the Dublin music scene than any other woman alive. She’s been at it for 10 years.

Ed and colleague John McRea have a new single out and call themselves “Geoffrey’s First Affair. ” Mary Coughlan is recording one or two of their songs on her new album. And they’re supporting Paul Brady at the RDS later this month.

Success, Ed thinks, is possible, “if you have any sort of intelligence and you’re a hard worker – if you get out and do it.” And being a woman is irrelevant, she thinks: “A lot of young bands in the pre-managerial stage can lose faith very quickly – nobody shows up at your gigs when you’re not known and that can be disheartening . . . but it’s ridiculous to say, I’m not getting there because I’m a woman.”

Portraying a different kind of consciousness are Ann-Marie McCormick (22), and Mary Downes (23), of Ton Ton Macoute, whose name they say is not meant to deliberately conjure up images of the Haitian dictator, Baby Doc, and his death squad. Ton Ton Macoute, to them, means “leprechauns of Haiti.”

They don’t see themselves as feminists [Mary says]: “I’m convicted to women but not that same heavy conviction, not a heavy feminist message . . . if you’re too much into feminism it can obscure everything else you’re interested in.”

Neither does Ed Darragh: “I’m sorry, but I’m not a feminist. They seem to have a chip on their shoulders.”

And Sinead O’Connor says: “I don’t want to look like a fashion model, I want to look like Sinead. I don’t wear make-up at all. I don’t feel pretty – I feel like me”. But she hasn’t felt influenced by feminism. “It’s just my personality.”