Breaking bad habits in the mercenary game of television

I’ve never owned a TV, so naturally I decided to make a television drama. Little did I realise it would lead to addiction problems and violence – and that’s before the show is even made 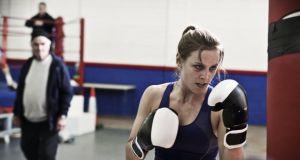 Kelly Gough as Eileen in Bás Arto Leary. Its writer Manchán Magan says: ‘All I wanted to do was make people aware of a poem . . . It’s now more about cocaine snorting and sex in dark lavatories’

We are all supposed to be TV literate now: au fait with story arcs, enabling protagonists and third-act denouements. If you can’t anatomise a Breaking Bad episode from its “call to adventure” through to the “cathartic switchback” stage, and the final “return with the elixir”, you’re pitiable.

I’ve never owned a television, looking instead to theatre, radio and books for entertainment, but last year I decided I’d better make a television programme.

It was Caoineadh Airt Uí Laoghaire that sparked me, the 18th-century lament by Eibhlín Dubh Ní Chonaill (Daniel O’Connell’s aunt) over the body of her dying husband. As a poem, it’s not too far from the rap paeans memorialising the violent deaths of Tupac Shakur and Notorious BIG, and so I thought it might make for good television drama. (I told you I don’t watch much television.)

Ní Chonaill composed it extempore as her husband lay dying in her arms, having been shot by the sheriff of Cork for not agreeing to sell his horse for five pounds. (In Penal times, Catholics were forbidden from owning horses worth more than a fiver.)

And so I am delighted when TG4 accepts the idea and enrols me in its Scéal scheme, which trains novice screenwriters and directors working through Irish. I meet up with the five other Scéal participants in a hotel in Connemara, all of us keen to unlock the mysteries of television writing.

The producer, Ciarán Ó Cofaigh, and Alison Lumb, a distinguished script editor from London, explain that the first lesson is to forget all about creativity. As Lumb explains: “There’s a romantic myth in our culture that writing is a spontaneous act and it will all happen naturally. It’s entirely a myth. Accept it. Every professional writer is aware of it.”

She begins with the opening scene – the most crucial of all, in which every element has to be calculated and scrutinised. The audience must be hooked as quickly as possible with a form of televisual heroin before they can switch channel, and they have to be kept there until the next ad break and through it until the following one. Forget art: this is business, a battle strategy for the attention of the viewers.

Once they are hooked, I have to think of addicting later-comers with slower-moving storylines that can be followed while the original junkies are mainlining on their initial high-adrenaline fixes. I accept that story-telling has always been more of a trade than an art, but I didn’t imagine it to be quite so mercenary. I suddenly understand why everyone is constantly lusting after each other in Love/H ate – it’s the easiest way to keep viewers.

I decide that I’ll definitely need more sex in Caoineadh Airt Uí Laoghaire . I thought Ní Chonaill’s account of her murdered husband would hold any audience, and my initial idea is to simply transpose her original 18th-century lines to a modern setting – that of the horse culture of settled Travellers in a deprived Galway housing estate, so it’s a bit like Baz Luhrmann’s Romeo + Juliet .

But Lumb is adamant; smiling primly, she points to her notes that state: “In a television adaption the new work owes nothing to the original but the spirit, theme and premise. It must work on its own terms.”

I try to argue, but she has worked on the likes of Casualty , creating stories that regularly appeal to 14 million people, as she explains, rather than the 400 people who might see my paltry plays.

Pace, plot and the icebox conundrum
I begin to swot up on plot, pace and dialogue, on tropes and overdosed tropes, memes and meme mutations, rotating arcs, aborted arc and the level of icebox inconsistencies one can get away with.

The latter is a term coined by Alfred Hitchcock to describe plot weakness that only “hits you after you’ve gone home and start pulling cold chicken out of the icebox”, much like ET’s flying bicycle: why didn’t he use it at the beginning of the film to avoid pursuit?

Lumb explains that not only must the story addict viewers, it must also perform a sociological function, becoming “a form of social glue, providing a common experience to discuss with family and friends” and even “a form of surrogate ‘company’”. On top of all this, it is important I bear in mind the size of the screen – being smaller than cinema, head-and-shoulders shots dominate, letting the viewer form an intense “relationshdip” with my lead characters. I have to make sure they are up to the task.

Again and again, I am advised to concentrate principally on the first few pages. If they fail, I’ll lose my viewers. While God took six days to create the world, I have only three minutes to establish mine; and not only the world, but also its main characters, main conflicts and central theme. And, of course, I need to kick off a “radical catalytic event that would disrupt the status quo and propel everything and everyone forward”. This event should ideally raise a dramatic question that will inform the action through the rest of the story and confirm what the whole thing is about, ie the premise.

A game of chess
It is like playing three games of chess in my head at the same time. All I wanted to do was make people aware of a poem. But, with my spirit completely broken, I begin to finally forget everything I had previously known and start to focus on scenes and story.

In February of last year, I submit my final draft, whereupon I’m allocated a director, Luke McManus, who was just finishing shooting If We Dead Awaken for Channel 4. McManus has won prizes at the Galway Film Fleadh and the Cork Film Festival for his short films, and has been nominated for Iftas and Celtic Media awards for his documentary Jump Boys . Hopefully he can untangle my mess.

It is a confused script, containing only homeopathic traces of the original poem, mixed with ideas and characters that seem to have slipped in from episodes of Twin Peaks , The Wire and Forbrydelsen I had been gorging on.

Fortunately, McManus has his own ideas and begins reshaping the thing before finally filming it in May, with actors who breathe more life into my ropey dialogue than it deserves. And although it’s now more about cocaine snorting and sex in dark lavatories than Eibhlín’s lament for Art Ó Laoghaire, she is such an invincible persona I hope her essence still shines through.

She might even like the raucous Tarantino feel of the film; preferring it to the pretentious poetry-slam thing I was considering.


The six 30-minute Scéal dramas, based on different works of Irish literature, begin with Bás Arto Leary (The Death of Arto Leary) on Wednesday, April 24th, at 10pm on TG 4