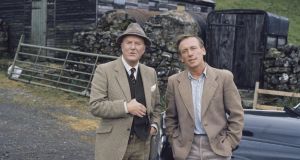 1980s version of All Creatures Great and Small

Cult enthusiasms don’t come any more niche than that for the UK Independent’s television listings of All Creatures Great and Small during the late 1980s. I’ve had a scout around the internet, but I can find no Reddit or Facebook groups dedicated to the phenomenon. No mention has been made in nostalgic TV programmes such as I Love 1989. Maybe I imagined it all.

Not a bit of it. For a few years that British newspaper, then in its prime, entertained an excellent running joke at the cosy veterinarian drama’s expense. It went something like this. “Episode 4: All Done Bar the Sheep Dip. James and Tristan have an uncomfortable experience at Tricky Woo’s birthday party. Siegfried falls into a vat of manure. Then they all go and stick their hands up a cow’s bottom.” The following Saturday it would be: “Episode 5: TB or not TB? Mr Biggins locks Siegfried and James in the privy when they threaten to euthanise his prize rooster. No doubt they both escape and celebrate by sticking their arms up a cow’s bottom.”

They were simpler times. We didn’t have the internet. Most people still had only a handful of channels on their telly (still just two in large sections of Ireland). Passing scraps of newspaper around the campfire was the highlight of any rain-blasted weekend spent at the warm end of the cave. “Look, they’ve said ‘cow’s bottom’ again.”

These memories are jogged by the news that, in Channel 5’s upcoming new version of James Herriot’s stories, artificial cow bottoms will be used for the weekly rummage around bovine intestines. Recent regulations have come to the creatures’ rescue. “Procedure-wise, you can’t do anything to an animal that it doesn’t require, or you’re not trained to do,” Nicolas Ralph, who plays Herriot, explains. In retrospect, it seems faintly scandalous that, in the 1980s, a few years at Rada were all the qualification you needed to interfere with a Friesian’s rear end. This does not sound like political correctness gone mad.

All this bottom action was odd coming from a series that could reasonably stake a claim as the supreme manifestation of comfort telly. Come to think of it, James Herriot’s stories offered, for a few decades anyway, a starting point for anyone writing about comfort reads. This was the comfort culture motherlode.

If Only They Could Talk, the first volume, was published in 1970. Seven further books followed over 22 years. Comprising economical storylines (ideal for TV adaptation), the sequence related Herriot’s experiences working as a vet in the Yorkshire Dales from the 1930s until the 1950s. The original Pan paperbacks, featuring colourful cartoons on the cover, rapidly became unavoidable. You found them in hospitals, retirement homes and bed and breakfasts. Anywhere that warm, unthreatening comfort was required, James Herriot (real name: Alf Wight) was there to assist.

Two modestly successful film adaptations emerged in the mid 1970s before the BBC took over in 1978. Christopher Timothy played the initially uncertain Herriot. Robert Hardy, than whom there was none more boomier, elbowed restraint aside as senior vet Siegfried Farnon. Peter Davison was amiably louche as Siegfried’s younger, less competent brother.

Filmmakers seeking a televisual expression of the 1980s – something to play in the background during your period cop drama – will tend towards The Young Ones or Edge of Darkness. The average punter was more likely to be slumped before the sedative pleasures of everyone’s favourite veterinarian sheep opera. It was never fashionable. It generated no copycat trends on the Paris catwalks. But it provided a service to stressed viewers across the world for years thereafter. In a documentary on the show, David Butcher of the Radio Times remarked: “At the end of the weekend you don’t want anything too taxing, you want some kind of escapist, gentle, heart-warming, cosy kind of drama. A cup-of-cocoa drama. It’s warm and simple and nice and lovely, and it’s not going to frighten the horses.”

No wonder so many people have returned to comfort watches during the ongoing pandemic.

Butcher was right to note the broadcast time. If we want to pare down our definition of “comfort telly” we could do worse than look at the British TV schedules for Sunday evenings over the past 60 years. As far back as the 1960s, BBC and ITV were, in the last hours of the weekend, feeding viewers nicely dressed period dramas featuring classically trained actors. The Forsyte Saga, a phenomenon in 1967 and 1968, was initially broadcast on Saturday evenings, but, as few people then had BBC2, it was the Sunday repeat on BBC1 that drew in up to 18 million viewers.

In the decade that followed, Sunday evenings were home to Dr Finlay’s Casebook (Scot doc action) The Onedin Line (Victorian ship action) and Poldark (no, not that one). Lovejoy and Heartbeat followed in the 1980s and 1990s. More recently we have had Downton Abbey, Call the Midwife and Poldark (yes, that one). With the exception of Lovejoy, all these series were set at least 30 years in the past. All are nicely dressed, politely shot and – though there may be the occasional discreet murder – unthreatening in their narratives. Nobody wants to be overly challenged when they’re preparing themselves for the Monday commute.

The most distinguished example of the genre was, however, surely Upstairs Downstairs. Initially conceived by Jean Marsh and Eileen Atkins, the ITV series, which ran from 1971 until 1976, told the story of a wealthy family and their servants through the first three decades of the 20th century. Characters such as Mr Hudson the stern butler and Mrs Bridges the indomitable cook remain immovable pillars of the British pop-cultural temple. Speaking 30 years after the show’s broadcast, Jeremy Paul, one of the core writers, expressed some surprise that a series covering the first World War and innumerable surrounding tragedies came to be seen as “soft”. But, like so many of the programmes mentioned above, it offered viewers a retreat from the unpredictable present into a past that had already sprung all its surprises on us.

No wonder so many people have returned to comfort watches during the ongoing pandemic. The shows become even more consoling when we’ve seen them before. We become as wary children demanding that mummy tell us the same story over and over again. Tell us about the Sleeping Beauty. Tell us about the nice people at Brideshead. Tell us about the vet sticking his arm up a cow’s bottom.

The new version of All Creatures Great and Small begins on Tuesday September 1st on Channel 5.