The Shed: a splash of colour in London’s theatrical landscape

The Shed, an intimate space at home to experimental theatre, seems like a venue designed to suit the times. At the heart of its success is Ben Power, a dramaturg, ‘shadowy figure’ and Shakespeare’s ‘remixer’ 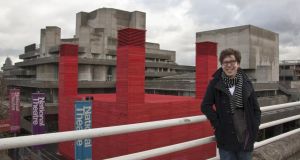 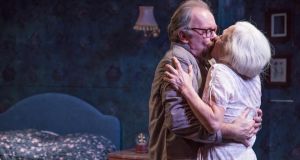 Owen Roe as Romeo and Olwen Fouéré as Juliet in A Tender Thing, written by Ben Power

It draws your eye, crossing the Thames on Waterloo Bridge, or slows your pace while walking along London’s South Bank: a huge incongruous wooden structure, as bright red as a new barn. Even among the eye-catching additions to London’s sleek and corporate skyline, the cheering sight of The Shed makes tourists pause to have a look, its four tall chimneys making it seem, vaguely, like an animal on its back.

In less than a year since this temporary space first appeared (while the National’s smallest auditorium, the Cottesloe, undergoes refurbishment), the Shed has distinguished itself as a visual spectacle against the grey barracks of the National’s complex, and in its programming it has emerged as one of the most exciting venues in London.

With a small capacity and an intimate performance space, it seems like a theatre designed to suit the times. It has hosted solo performances that seem to speak directly to the audience, such as Sea Wall, Simon Stephens’s devastating monologue for Andrew Scott, or staged work that literally involves them, such as Rob Drummond’s audience-volunteer-dependent Bullet Catch. It has also hosted ambitious experimental work from America’s Team, and several new works, such as Debbie Tucker Green’s play Nut or Nadia Fall’s Home. Soon it will host Olwen Fouéré’s incantatory Riverrun. It is hard to separate this space’s sense of daring from its architecture, and it is hard to separate its identity from its programmer, the writer and dramaturg Ben Power.

It would be too easy to construe Power, an affable man in his early 30s, as a “young fogey” – a Cambridge graduate in horn-rimmed spectacles and Converse. “It has never needed to justify itself,” he says enthusiastically of the Shed, “which has then allowed us to be really brave in the programming of it and to reach out to a new constituency of audience and type of artist; to introduce artists to this organisation who haven’t been here before.”

Audience at the heart of it
He agrees that it readily accommodates the intimate methods of contemporary theatre, which might be lost in larger venues. “These artists are not making work to be separated from the audience,” he says. “The implication of the audience, formally and in the content, feels like it’s really at the heart of what they’re doing.”

You could say the same about Power, who has long taken a bracing approach to the architecture of classic plays, refurbishing their interiors, retrofitting old dramas with modern extensions, and letting audiences appreciate them from surprising new angles. His first adaptation was Paradise Lost, with his mentor Rupert Goold’s Headlong company. There he also reworked Christopher Marlowe’s Dr Faustus to accommodate an ingenious parallel plot involving Britart’s enfants terribles, the Chapman brothers, plotting to deface Goya’s etchings. The disputed soul of the play became a debate about ownership and art. When the company staged Pirandello’s Six Characters in Search of an Author, a once-radical work long made overfamiliar, Power sought to return the shock of the new by transplanting it to a reality TV studio, where a family appear and demand that their story be filmed.

Rome and Juliet in later life
In Dublin, Siren Productions are currently staging Power’s play A Tender Thing, for which he took the text of Shakespeare’s Romeo and Juliet and repositioned it to tell the story of the two lovers in later life. It’s hard not to consider the play, originally written for the Royal Shakespeare Company, a postmodern enterprise, fashioning a new text from an existing one (at one point Power refers to it as “remixed”), or, like Tom Stoppard’s Rosencrantz and Guildenstern Are Dead, or Arthur Phillips’s The Tragedy of Arthur, another attempt to expand the universe of Shakespeare. But in Power’s play, Romeo and Juliet seem to exist in a perpetual state of wooing and soft decline (“I have forgot why I did call thee back,” says Juliet once again, for much sadder reasons), and the erosion of their world is no less tragic than the snuffing out of young love.

“It would be easy for me to retrospectively apply some sort of philosophical approach,” says Power. “A Tender Thing evolved quite organically and pragmatically within the Royal Shakespeare Company, but I now see a lot of the impulses as being part of the same thing: trying, where possible, to identify and then communicate some of the authorial impulse. What those theatre makers were trying to do to that audience at the moment of performance.”

In 1926, he points out, Six Characters was so disturbing it caused riots in Rome. “So we tried to identify the thing which made it provocative and almost revolutionary – and sort of got rid of everything else. Then you put that in whatever context allows it to speak most clearly. I just think one has to have the freedom, the obligation, as a contemporary theatre-maker to pursue that.”

With A Tender Thing, he continues, the effort could be seen as something similar: to take away our obvious associations with Shakespeare’s drama – “that it’s a play about teenagers, generational conflict, the first time one experiences something” – to make “a very particular, partial, experimental remixed version” that is finally about “sex and death”. But the play’s origins, he happily admits, were more practical, inspired by what sounds like a sly joke. Some years ago an actor in his 60s approached the Royal Shakespeare Company’s then director, Michael Boyd, and told him, “I finally feel ready to play Romeo”.

Power’s adaptation was guided by one question: in taking the play apart and putting it back together in a new way, using lines from all the characters, was it possible to tell a new story? “It almost was,” he smiles. “Then you bend the rules when they are no longer useful.”

Boyd had likened Power’s work to melting down a sculpture and using the bronze to make something completely different, but Power introduced an alloy made from Shakespeare’s sonnets and some of his own sparing original elements. “It’s kind of all right, at the end, to use a bit of Blu-Tack.”

It’s remarkable how few people can fathom Ben Power’s job description. In the Guardian, for instance, he has been referred to as both “a script doctor” and, more evocatively, “a curiously shadowy figure”. Power prefers the term dramaturg. “In an artform concerned with liveness, I don’t understand what we’re doing if we’re not trying to make something new. I do call myself a dramaturg, partly because no one knows what it means in this culture. So it’s hugely liberating. The thing that unites everything from A Tender Thing to Pirandello, to working on King Lear [Sam Mendes’s new production at the National] or with Lucy Prebble on Enron, is that I am there to try and identify authorial intention, whoever the author is, whether it’s Simon McBurney or Shakespeare, and then do whatever it takes to articulate that.”

A like-minded ally
In Siren’s director, Selina Cartmell, he has a like-minded ally. “She really understands the text instinctively,” he says. “We share a desire to make something that feels exciting, challenging and visceral. The danger of this play would be to sit back and allow it an elegiac, autumnal quality. Selina has got it by the scruff of its neck.”

Yet when asked about the precocity of someone who dared to rewrite Shakespeare in his 20s or to access the minds of characters in their 60s, Power demurs.

“Shakespeare’s done it for me. He’s written the thoughts and emotional life of a pensioner. It’s in there. It’s just a case of finding it.”

A Tender Thing is at Project Arts Centre until February 15