A curiously unsettling double bill from the deadpan Dick Walsh teases out the options within politics, stories and free will. Do we really have a choice? 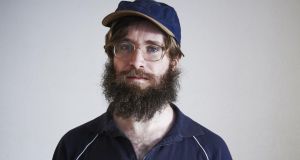 If you took all of Dick Walsh’s observations and anecdotes and laid them end to end, it is unlikely that they would reach a conclusion. That’s also the sensation of his arrestingly strange double bill, revived and reconsidered for a Pan Pan presentation, which delivers rambling narratives with a curiously hypnotic hold.

Dangerman, first staged in 2012, is the more abrasively immediate of the two, an arch illustration in persuasion and resistance. Walsh, who tersely offers to take your coat on the way in, embodies the threat of the title: a deadpan and subversive figure who has a cajoling way with a lecture. “What’s politics now?” he asks, and so begins a potted history of the world; from Genesis to Maoism, capitalism to monarchy, brutal spartan pedagogy to fratboy initiations.

It is absurdly, disquietingly funny, a sensation increased when Walsh palms off various non-sequiturs as fluidly logical (“And here’s the point,” he will say, never arriving at one.) Although not quite combative, there is a frisson of cruelty in such gestures, while frequent invitations for audience involvement leave us pointedly exposed. “People always do what you tell them in the end,” he says. Even an opportunity to demonstrate our free will doesn’t dispel the aftereffect of a performance so considered, so quietly fiendish, that you marvel finally at what sheep we really are.

Some Baffling Monster, an exercise in family tragedy, storytelling and flatline delivery, is integrated less persuasively into that performance, presented as a cod morality tale. When a cow plunges over a cliff on grandpa’s farm, under his stepson (and would-be successor) Christie’s watch, is it suicide or is it murder? Walsh’s direction invests the reassuringly daft premise with a presentational, affectless style somewhere between Brecht and Richard Maxwell. On a bare stage (except for the coat rack), all three performers occupy static positions, holding their arms awkwardly akimbo; an epic parody.

Walsh’s real interest, however, seems to be how we shape our world through patter and perception. As their anecdotes teem and multiply, characters attempt to mythologise or demystify reality, stopping occasionally to examine the power of their own rhetoric. Grandpa (a sagely bearded Rick Seery, left) emerges as an imaginative optimist and Christie (Shane Connolly) as a hard pragmatist, leaving Kyle Hixon’s Jacob (and to some extent, the world) caught between two extreme forces. It doesn’t so much end as trail off, but the entire performance is a sneaky exposure of the audience’s own process within slyly narrow options. What is politics, indeed?