The Dublin Pals who set off for Gallipoli’s killing fields

In 1914, sports club members volunteered for ‘Pals’ battalions, and fought in one of the first World War’s bloodiest battles. A new immersive theatrical show remembers their catastrophic story 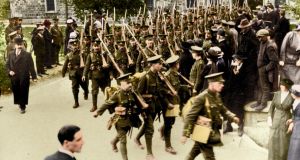 These days the Gelibolu peninsula on Turkey’s Aegean coast is a quiet place, all gentle hills and pine forests alive with birdsong. It is fertile farming country, but to be a farmer in this area is to get up close and personal with history. Come ploughing season, the turned-over earth reveals hunks of rusting military equipment and fragments of shrapnel – even, occasionally, human bones. For in the spring of 1915, these were the killing fields we call Gallipoli.

In Ireland we have shown a marked reluctance to get up close and personal with – or even listen to – the stories of Irish soldiers who fought in the first World War. A new, immersive theatre project by the company Anu at the National Museum of Ireland in Collins Barracks aims to help change that. Pals: The Irish at Gallipoli tells the story of a group of young Irishmen who found themselves on that unforgiving battlefield in the spring of 1915.

“Pals units were a concept that the British army came up with in 1914,” says Lar Joye, curator of Irish Military History at the National Museum of Ireland Collins Barracks. “Armies rely on innocent under-25-year-olds rushing off to war because the generals don’t do the fighting. So you need young, enthusiastic men to do your fighting for you. The idea was that people from the same clubs or associations would all join up as one unit.”

In Dublin, a largely unionist city in 1915, the president of the Irish Rugby Football Union, FH Browning, appealed for recruits. Some 220 athletic young Irishmen signed up at Lansdowne Road and became “D” Company, 7th Battalion, Royal Dublin Fusiliers. “The people who went into ‘D’ Company were from the better private schools from the southside of Dublin and all over the country,” says Joye.

From all religious denominations

The members of “D” Company came from all over Ireland and from all religious denominations. Some had been educated at Clongowes, some at Blackrock College. Many were students in Trinity. John Boyd, born in Cavan, worked as a clerk in the Department of Agriculture and played rugby for Clontarf. William Boyd (no relation) was a commercial traveller who lived in Rathmines and played for Bective Rangers. “Their parents were bankers, solicitors, doctors,” says Joye. “Be they Catholic or Protestant, these boys were being groomed as future leaders of the country.”

The unit was based at the Royal Barracks in Dublin (now Collins Barracks). Joye first encountered their stories when, some years ago, he came across a book published in 1917 called The Pals of Suvla Bay.

“The families and the men who survived came together to tell their story,” he says. “At the back is an appendix with a photograph of every single one of those soldiers, and a little biography, a pen picture – which is unique because when you get into 1917 and 1918, the numbers of dead are colossal. There isn’t time to document it.”

The book provides a hugely evocative basis from which to start working on a theatre piece. The actors chose three soldiers – Ernest Hamilton, Jasper Brett and Richard Patrick Tobin – to embody the fate of the whole company. As so often with Anu productions, the building itself plays a major role in the drama, with much of the action taking place on the square where “D” Company actually did its training.

“The training they received was very, very amateurish,” says Lar Joye. “The books and manuals that they would have been using were written in the late 19th century. There was a lot of marching around the square. They also loved going on route marches. They’d get up at 6am, leave the barracks at seven and march up to the Wicklow mountains and back.”

As preparation for the fighting at Gallipoli, it was to prove desperately inadequate. “The reality was that five guys with a machine gun could stop 700. That was the horror of the new warfare. In the 21st century we’ve all read the books and seen the movies. We realise that war is brutal. But coming out of the Edwardian period, this generation thought they stood a chance going up against the modern war machine. They were very naive. In 1915 they really did think, I’ll stick a bayonet on my rifle and I’ll charge 50 yards across open land and see what happens.”

What happened was a catastrophe. Within three weeks, “D” Company had suffered a 70 per cent casualty rate. Besides those who were shot, many were burned in bush fires. Dysentery was also a major killer. “That’s one thing that comes out of the letters written by the men at the time,” says Joyce. “They were desperate for water. The Turkish army had poisoned the wells, and some wells were also contaminated from the large number of dead bodies which were there. These guys are fighting for their lives – and they can see water all around them because they’re on a peninsula looking down into the Mediterranean. But they can’t drink that water either.”

In another of the many ironies that make this story so poignant, many of the young soldiers were to be buried at sea. Back at home, a wave of silence closed over their sacrifice, regarded by many people as a “west Brit” business that had no place in proper Irish history books.

“After independence the simple story for a lot of people in Ireland was, ‘Let’s talk about 1916’,” says Lar Joye. “World war one is complicated: 200,000 Irishmen serving in the British army. The war of independence is a dirty war: both sides carry out atrocities. And no one wants to talk about the civil war. So the easy narrative for everyone is, ‘Let’s just focus on this rebellion, which was a heroic failure’. And the complexities were largely ignored.”

The situation has changed in recent decades, with many historical books and articles exploring Irish involvement in the war. At Collins Barracks, a programme of school workshops and an exhibition of photographs taken by a young Irish doctor at Gallipoli will run alongside the Anu production. In this centenary year, art may help heal some of the fractures as lectures, workshops and exhibitions around the country add more pieces to this complex historical jigsaw.

Recovered Voices: Stories of the Irish at War 1914-1915 is now open at Collins Barracks. Pals: The Irish at Gallipoli will be performed Wednesday to Saturday, with three shows on Sundays, until April 30th. Tuesdays are reserved for transition year students

‘WE WILL DO OUR BEST’: MARCHING OFF TO WAR

On May 1st, 1915, as part of its regular war coverage, this newspaper ran a piece about the departure of “D” Company for the Mediterranean. Spread across three columns at the bottom of page eight, it describes the scene at Collins Barracks as the men set off, full of energy and optimism: “from the fashionable centre and from the slums of the city, able-bodied citizens flooded to the Colours”.

Despite the fact that many of the young soldiers would never see their families again, the mood was upbeat in a way that’s hard for a modern reader to get their head around. A band played and free cigarettes were handed out “by the students of the Royal College of Surgeons”. Just one line casts – at least in retrospect – the shadow of what’s to come. When the reporter asked the unit’s commander, Col Dowling, if he had a message for the people of Dublin, he replied: “We will do our best. Judge us by our deeds.”