Sean Doran wants to make Happy Days a ‘destination festival’, turning Enniskillen, where the playwright and novelist went to school, into a Mecca for his fans 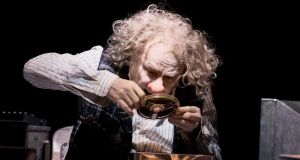 There are three events that Sean Doran recalls, over the course of a varied international career as an artistic director, when he thought he had finally gone too far.

The first happened precisely 10 years ago, when Doran, freshly appointed to run English National Opera (ENO), decided to take the company to the mucky fields of Glastonbury. “I knew it would work,” he says of ushering Wagner’s The Ride of the Valkyries on to the Pyramid stage on a Sunday morning. “But to everyone around me I was a barbarian.”

That’s a strange description for this genial, soft-spoken Derry-born man. “It was one of the most extraordinary moments in my life,” he says. “A silence descended upon the field, once it moved beyond Ride of the Valkyries. Always, always trust your audience.” He adds, “Of course, you can fall flat on your face if you take risks.”

It’s a high-wire act that he has become used to. When, some years before, he phoned Perth International Arts Festival to tell his staff he had found the centrepiece of his first festival programme – an 18-hour Chinese opera called The Peony Pavilion – he was welcomed back with an emergency meeting. “You start your persuasion then,” he says. “But the audience came to see it like nothing else. I wanted a statement for the first festival. It was a gift for me.”

Which brings us to his most recent, and apparently most unnerving, pause for thought: waiting, under a grey sky at 5.30am, for a boat from Enniskillen to Boa Island, where Adrian Dunbar would read Samuel Beckett’s final prose piece, Stirrings Still. “It’s kind of purgatorial,” he says of the event, his own brainchild. “You carry your own chair up the hill, and it had rained the night before, surrounded by ninth-century ruins . . . Going out, I thought, This is the stupidest thing ever.” Instead he was transfixed to hear a man read, with utter simplicity, from among the last of Beckett’s writings. “And the words held,” says Doran.

That was the inaugural year of Happy Days, the Enniskillen International Beckett Festival, which Doran began in 2012, and the Purgatorio Island Readings are now the first events to sell out. “Before doing it, of any festival in my entire life, this one weighed heaviest.”

How does somebody become an artistic director for hire, a position with no obvious career path? “It wasn’t quite accidental,” Doran says. Educated in Derry, at St Columb’s College, Doran studied music at the University of East Anglia, qualified as a clarinettist and conductor and spent the next six years in London, setting up a music company. He got involved in music criticism and travel writing, authoring the first Rough Guide to Ireland. “I didn’t know what I wanted to do,” he says.

Stopping in Derry, en route to Chile, at the age of 30, he was approached to run the Impact ’92 festival, which had reached a position of crisis, about six months before it was due to start. It was a baptism by fire. (“Much of my career has followed that sort of thing ever since,” he says.) But its possibilities were attractive. “I could bring the artists I admire, who I adore and who can do things better than me, to places where people would not otherwise have access to their work,” he says. “That set the ground in terms of my interests.”

Indeed, his work across several festivals now has been characterised by imaginative collaborations. In that first festival he brought Deborah Warner’s visceral production of Electra, starring Fiona Shaw, to a sports hall in a turbulent Derry. As director of the Wales-based UK Year of Literature and Writing, in 1995, he invited the former US president Jimmy Carter, Saul Bellow, Ken Saro-Wiwa, Seamus Heaney, Jane Campion and, surprisingly, Bono to participate. Such an approach – the combination of figures from the world of high art with luminaries of mass culture – has meant that Doran must regularly defend himself from charges of gimmickry. Commissioning more than 50 sculptures from Antony Gormley for the Australian outback, or presenting Merce Cunningham Dance Company on the beach brings plenty of kudos. Opening the literature strand of Belfast Festival at Queen’s, in 1997, with Nick Cave and Kylie Minogue was always likely to make headlines.

As he describes it, a festival is successful only when it respects its context. Parachuted into Perth, he worked hard to build a necessary affinity. “I’ve always had that capacity for research and detail,” he says. “In the Rough Guide days they had to haul me home because I wanted to go down every little track and keep finding, keep finding. I do put an awful lot of time into it.”

This might explain why he has become jaded by the similarity between so many international festivals. “I was disillusioned, to be honest, because festivals were beginning to look like one another throughout the world. It despaired me, in a general sense, that it was no different in Perth to somewhere in America or to here. A show could open and you wouldn’t know where they were sited or what they were coming out of.”

At the end of his tenure at ENO, and after 15 years as an artistic director, Doran took a break. “I would have been burnt out,” he says. “So much of my life was spent taking care of money – raising it, organising it – and too little time was spent with the work, really.” He took to reading Beckett, an author who few people would consider a form of light relief, yet Doran found it inspiring. Reading Beckett was uplifting. “I think I responded to it as a musician, reading the later work and the prose, which for me is like lieder [German art song]. It’s got great purity. I’m not very good at articulating it; I’m a doing man, you see. But I felt moved by the humanity of the work.”

There are broadly two strands to Happy Days, from which all the events are drawn: Beckett’s work and Beckett’s life. You are just as likely to see a production of Krapp’s Last Tape or Waiting for Godot as to hear a recital of Schubert’s Winterreise (Beckett’s favourite composition), to trace the writings of Dante or Joyce (his influences) or to play a game of cricket (his passion).

Beckett was reticent with personal details, which creates a tension when entwining considerations of the artist and the man. “Imagine if he was alive,” Doran says at one point. “I don’t know if I could have done it.” But there is something more revealing about Doran’s concept of a “destination festival”: Beckett, whose works carefully avoided identifiable landmarks or idioms, has been given a place. His audience has a Mecca.

“I did wonder would it work, creating this place for Beckett,” says Doran. “Yes, he spent three years here” – at Portora Royal School – “but he doesn’t write much about that time. The place itself, though, has this lending of stillness. They’re still waters, as opposed to running waters, for starters.”

Doran enjoys the levity that Beckett – who rarely met a low joke he didn’t like – can afford to a festival held in his honour, represented in throwaway details such as Beckett haircuts or Krapp sandwiches. But he’s serious when he says he can foresee 30 years of programming from so singular a source. “It’s fathomless,” he says of the work. “But somehow there is a comfort in it. There’s no answer, but the answer is always there, and that releases you in some way.”

Beckett for beginners: What to look out for at Happy Days
As befits a festival inspired by Samuel Beckett’s work and his life, the third Happy Days programme of performance, music, talks and readings is considered, searching and affectionate. Here are five picks.

Krapp’s Last Tape In its inaugural year, Happy Days divided the audience with Robert Wilson’s radical version of Beckett’s meditation on mortality. Now the version by the theatre and opera director Peter Stein offers us another singular take, with Klaus Maria Brandauer as the lugubrious birthday boy.

I Went to the House But Did Not Enter Inspired by Beckett’s late prose work Worstward Ho (“Ever tried. Ever failed . . .”), the German composer and director Heiner Goebbels creates a piece of music theatre with the Hilliard Ensemble and Théâtre de Vidy-Lausanne to depict the slow subsiding of life.

Roaratorio – An Irish Circus on Finnegans Wake With only one theatre, Enniskillen asks the festival to be inventive with its performance spaces. Here, the Marble Arch Caves, accessible by boat, host a sound installation of John Cage’s 1979 Joyce-inspired composition, followed by a subterranean performance by Dylan Quinn Dance Theatre of excerpts from Merce Cunningham’s 1983 choreography of the piece.

Catastrophe The festival’s ambition is to originate works. Here Adrian Dunbar directs the late short play, dedicated to the then imprisoned Vaclav Havel, which may be Beckett at his most concisely political. Elsewhere, talks by Terry Eagleton, Germaine Greer, Declan Kiberd and Roy Foster illuminate the origin, influence, context and political purpose of Beckett’s work.