Review: Defender of the Faith 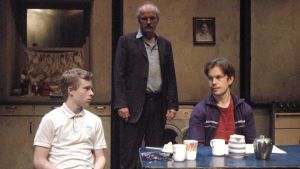 “Nobody likes a tout hunt,” says Joe, an Armagh farmer and IRA member who suspects he has a traitor in his midst. Fearsome and hot-tempered, he is not a man you would want to contradict. But given that his creator, Stuart Carolan, would repeat similar plot lines in more than one series of his TV drama Love/Hate, someone does have a certain fondness for them. Tout hunts or rat chases, particularly those that lead close to home, are the stock in trade of a contemporary tragedian.

Set against the Border county paramilitarism of 1986, Carolan’s debut play, first staged in 2004, is a study in family and loyalty within a deeply toxic environment. Men here are judged by hardness and silence, and even a child pretending to be Biggles can be harassed as a British sympathiser. For Joe (Peter Gowen) and his bitterly aggrieved son Thomas (Michael Ford FitzGerald) life on this farm is already unforgiving: pups must be drowned; squealing pigs sense their slaughter. When Joe describes the apparent suicide of Thomas’s brother, Shamey, to Diarmuid de Faoite’s menacing IRA intelligence officer, it comes in animalistic images, as natural as “culling a herd of cattle”.

Decadent Theatre’s canny revival of the play twists the tension of the drama into its design, where Owen MacCarthaigh’s ingenious set of monolithic slabs will rotate to form a gnawingly off-centre kitchen, a farmyard or a corroded wasteland, while Carl Kennedy’s excellent score of militant beats and degraded signals brings a pervasive sense of suspicion and unease.

Director Andrew Flynn steers his commendable cast through the “whatever you say, say nothing” logic of a coded culture (an unseen boss may be “a thick c***, but he’s not stupid”) as well as Carolan’s haunting symbolism. Few come better than Lalor Roddy, as the simple-minded farm hand, Barney, fixated on the exposed feet of another murdered informer. That is, you suspect, a dog’s whistle reference to Oedipus, another story of swollen feet, roadside murders and a family’s destruction. But finally the play loses such subtlety, bundling its terse conflict into a late series of expository accusations, counter accusations and distrait monologues; tit for tat, tout for tout.

The men here, untempered by women and undercut by associations with saints and defenders, display little soul to lose, rarely speaking with conviction about a cause. (When Mike O’Halloran’s lights, beautifully gloomy throughout, give an ironic flash of a tricolour, the point becomes a little blunt.) The drama, which endswith a flurry of violence, can also feel short of purpose. It’s all admirably well-served by an accomplished company, however, whose faith in the material is always absorbing. Until Nov 29