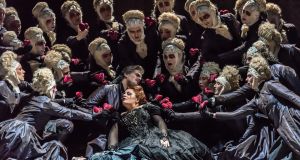 Venetian audiences so disliked the 31-year-old Donizetti’s 59th opera, Maria de Rudenz, that, when it was first presented at the Teatro La Fenice in Venice in 1838, it was quickly taken off and replaced by another Donizetti opera. One of the singers summed up the objections by calling the plot “a disgusting load of butchery”.

The plot is indeed complicated and gory. The murderous heroine effectively dies twice, and there’s a lot of back story needed to explain what is actually going on.

The Wexford Festival’s intricate, handsome-looking production, directed by Fabio Ceresa, with sets by Gary McCann and costumes by Giuseppe Palella, presents the action in a giant doll’s house that fully fills the stage, but which can also separate into modules that revolve, separating and reassembling into new structures.

It’s a production which is at all times visually absorbing – Christopher Akerlind’s lighting is exemplary – and the convolutions of the plot are conveyed with commendable lucidity, although the recurring use of dolls and mime does get out of hand when it goes into Punch and Judy territory.

On the opening night, Andrew Greenwood’s urgent conducting seemed to put the Wexford audience in immediately receptive mode – not for nothing is Donizetti the festival’s most-performed composer – and two of the principals, Italian soprano Gilda Fiume in the title role and South Korean baritone Joo Won Kang as Corrado, did likewise.

Fervour was Kang’s favoured currency. Fiume’s Maria sounded altogether more reflective, often mulling her situation over with finely-spun, expressively contoured tone. Even when she died – for real, the second time – she managed to convey a sense of the ebbing of life while still engaging in a glorious vocal display.

American tenor Jesus Garcia’s Enrico (brother of Corrado, though not actually, and also rival – it’s that kind of plot) sounds too pressured to allow much subtlety, and the other woman of the quartet of principals, Matilde, is effectively taken by Georgian soprano Sophie Gordeladze. The chorus, often communicating as if a character in its own right, makes the most of its well-calculated interventions.

What this performance offers is an often fascinating outing for an often impressive work which lay untouched for more than a century, but which won’t quite go away since it was first revived back in the 1970s.