In doing so, he hopes to chip away at our ‘monolithic ideas of identity’ 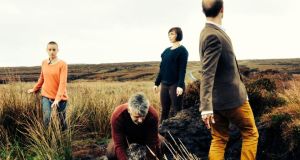 The Fifth Province explores a metaphoric space beyond physical geography where individuals can interrogate their cultural, social and political identity without the influence of others

The chosen click will either lead to an outline of choreographies for the professional dance company or a collection of deep-rooted participatory projects and classes within the Enniskillen community.

Although they may inhabit different parts of cyberspace, there is a seamless integration of professional and community in the company’s daily life.

It can perform at the American Arts Presenters Association in New York while advertising workshops on billboards on the streets of Enniskillen, and its eponymous founder can talk engagingly about his choreographic practice while tweeting about Zumba classes.

“When I choreograph, I try to say something about the world we live in,” says Quinn. To understand that world, he needs to engage with it. He doesn’t seek a sanctuary for his artistic process, but needs it to be part of his daily life as he raises a family and manages a company and studio in an industrial park in Enniskillen.

It is an outlook that is increasingly rare in the arts, where education and outreach can be an add-on to professional practice, a tick-box that will unlock further funding.

Quinn also doesn’t shirk from confronting what he sees around him. Past works have questioned sex-trafficking, dependency and control, and violence as entertainment.

His latest, The Fifth Province, explores the concept of in the title, a metaphoric space beyond physical geography where individuals can interrogate their cultural, social and political identity without the influence of others. The idea was popularised in former president Mary Robinson’s inaugural speech in 1990, which equated it with an emerging Ireland of tolerance and empathy.

“The Fifth Province is not anywhere here or there, north or south, east or west. It is a place within each one of us; that place that is open to the other, that swinging door which allows us to venture out and others to venture in,” she said.

Earlier, in the 1970s, the metaphor was used by philosopher Richard Kearney and Benedictine abbot Mark Hederman in the biannual cultural journal The Crane Bag, a publication that gave a forum for diverse viewpoints across political and religious divides.

“I’ve always been interested in the impact of conflict on communities and individuals,” says Quinn. “The Fifth Province is a natural bedfellow for that because it explores difference of identity between communities. In Northern Ireland, we have monolithic ideas of identity, which tend to be defined not by the individual but by others.”

After graduating from the Northern School of Contemporary Dance in Leeds and working with various companies in the UK, Quinn moved to Castellón in Spain to undertake a master’s in peace, conflict and development studies.

Returning to Ireland, he combined his dancing with lecturing on peace and conflict in NUI Galway and on a peace and community development course in Sligo. He has considerable academic ballast to his ideas around The Fifth Province, but what can dance offer?

“There are many ways of communicating and understanding the world, and what dance does really well is allow people to feel something.

“So, if somebody comes to the performance and even for 30 seconds is lost in the moment of feeling, that emotional sense that comes from watching the movement and almost embodying the movement, then they’ll get a sense of what that Fifth Province is about.

“It’s a metaphoric place where you can say, ‘In this moment I am what I am’, and not feel threatened by others.”

Being comfortable with one’s identity means being open to others, the swinging door referred to by Robinson.

Onstage, this is manifested in shifting lands and uncertainty underfoot. “There’s a lot of soil onstage, so the audience can see the physical shifting of the land. This really allows us to explore how identities merge together and interact.

“They aren’t necessarily conflictual, but when they are, there is still space to accept and move around the other.”

In conversation, Quinn is engaging and passionate about the ideas that underpin his dances, but he is always mindful of not letting the concept overpower the craft of choreography.

Some of his earlier works, such as the one-man show Fallout, were confrontational and loudly demanded a visceral audience response. More recently, dances such as Fulcrum – an almost meditative duet exploring dependency – allowed the viewer more space to find personal meaning and empathy within the movement.

“I don’t think that there’s a traceable artistic journey. Each piece demands a different approach, but it’s true to say that I’m always trying to refine the manner in which I present work.”

As ever, Quinn has gathered together fellow artists to realise The Fifth Province: composer Andy Garbi, visual artist Seamus Harahan, and costume designer Gráinne Maher. Rather than just add last-minute bling to his movement, all three have been in dialogue with Quinn since the project’s inception and have contributed ideas towards its overall form.

Similarly, dancers Jenny Ecke, Anna Kazuba, Lucia Kickman and Keir Patrick have helped devised movement rather than being passive receptors of his instructions.

“They are intelligent thinkers and intelligent movers, so of course I would want their input,” he says.

Quinn is also respectful of the broader community in feeding his artistic ideas. As part of his research last October, he worked with Community Dialogue Belfast to bring people – mostly arts-based community practitioners – together to explore ideas around identity in Northern Ireland.

Harnessing this experience, ideas and learning not only enriched the choreography, but demonstrated the non-existent barrier between Quinn’s professional practice and his work within the community.

This open-palmed acceptance of other viewpoints, which underpins his artistic outlook and practice, is a perfect example of the shared pluralism that is needed in Northern Irish society. “Dance won’t answer all of the questions,”he says, “but it will raise some new ones.”

The Fifth Province is at the Mac in Belfast on January 30th and 31st and at the Ardhowen Theatre, Enniskillen, on February 7th