Dublin’s Fringe festival kicks off with some sassy political cabaret

The theatre festival is up and running; here’s some of what to expect over coming weeks 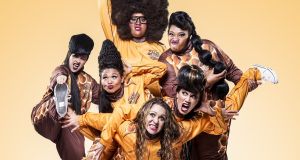 Fight the power: Hot Brown Honey, at the Spiegeltent

The Dublin Fringe has kicked off with a bang at venues around the city, including in the mirrored Belgian Spiegeltent @ Merrion Square, and with new shows opening throughout the festival.

Over the next fortnight, the capital is host to 412 performances of 73 shows in 23 venues, with a massive range of Irish and international theatre, dance, circus, music, comedy and live art.

The festival opened explosively at the Spiegeltent with Hot Brown Honey, an exhuberant, loud burlesque/political cabaret from Adelaide, performed by a troupe of sassy Polynesian and indigenous women promising to fight the power.

Some of the other highlights over the next two weeks from Fringe festival director Kris Nelson and programme manager Ruth McGowan include: Brokentalkers’ This Beach, a critique of contemporary Europe; a family dance show Into the Water; video and satire shaking up four decades of pop culture in Penny Arcade’s Longing Lasts Longer; hip-hop, spoken word and explosive beats from the Rusangano Family; comedy from Deirdre O’Kane and Jason Byrne; and RuPaul’s Drag Race superstar Jinkx Monsoon and her dashing companion Major Scales.

We’ll be following the Fringe daily, with reviews live on at irishtimes.com the morning after opening nights.

Writer’s block: how to be creative even in crisis
Real news has value SUBSCRIBE