Lack of female playwrights described as ‘disappointment’ after Waking the Feminists 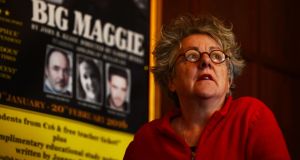 Druid has received a lot of criticism on social media for its programme which features four plays all written by men - The Beauty Queen of Leenane by Martin McDonagh, Waiting for Godot by Samuel Beckett, Crestfall by Mark O’Rowe and King of the Castle by Eugene McCabe.

Shortly after Waking the Feminists was announced in November 2015, Ms Hynes wrote a letter to The Irish Times in which she stated: “We are all at fault here. We must have the conversation internally within our own organisations and more broadly between us as an industry and we must do this as a matter of priority.”

The 2017 Druid programme, however, had no female playwright though all four directors of the plays in question will be women.

Irish playwright Abbie Spallen who last year won one of the world’s richest literary awards, the Windham-Campbell Prize, tweeted: “I find this programming very disheartening especially from someone who was at the forefront of the WTF movement.”

The New York based playwright Lisa Tierney-Keogh tweeted: “A huge disappointment to see a year’s worth of work to redress gender imbalance in #Irish #theater effectively be ignored. #equality #Druid.

“Female theater artists are completely done with not being represented.”

Another who voiced disapproval was the actor Brian F O’Byrne who tweeted: “I call on @DruidTheatre to commit to all female 2018, and an apology to female playwrights #AllMaleSeason #OwnIt #WestAsleep @WTFeminists.”

She explained that two of the productions, The Beauty Queen of Leenane and Waiting for Godot are running on from 2016 while the other two are commitments entered into by Druid going back to 2015.

She added: “Real change will not be immediate nor can it be a simple matter of ticking individual boxes; it is not simple statistics. What matters is our commitment to real and sustainable change and the work we put in to making that change happen.”

She said Druid were doing what it could to promote gender equality by commissioning new plays by women and plays written by men which “ address honestly the situation of women in our society and present strong, interesting roles for women.”

She concluded: “Making a real difference takes time - quick wins alone are not the answer. As Lucy Kerbel says in All Change Please: A Practical Guide to Achieving Gender Equality in Theatre: ‘We should give ourselves permission to see change as a string of separate, achievable actions we can pursue, rather than one single Herculean task.’”

Waking the Feminists founder Lian Bell said Druid had been “naïve” in not addressing the lack of gender balance in its programme when it was first announced.

“What is really heartening for me is that people point it out when there is a problem,” she said. “Because she (Garry Hynes) has been engaged with us, she missed a step in talking about how unbalanced it was.”

Ms Bell said every theatre organisation should draw up a gender equality plan. “If they (Druid) had this very clearly planned out they would not be in this kind of shtick.”