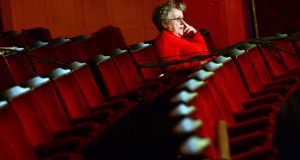 When Samuel Beckett’s Vladimir and Estragon wait in vain for someone named Godot, they might as well be on Co Wicklow’s Military Road, on the Aran island of Inis Méain, or within the 6,000-year-old Céide field system in north Mayo, at least according to Galway’s Druid Theatre company.

The company has selected all three locations for its new production of Samuel Beckett’s classic work, as they are “bleak but beautiful” and “befit” Beckett’s text.

The “unusual rural tour” programme was unveiled by the theatre company on Tuesday.

The production has already sold out in Galway for the entire fortnight of the city’s international arts festival.

Druid said that the decision to take the work to the Aran islands, north Mayo and Co Wicklow “continues” its conversation with the Irish landscape, and “demonstrates the company’s ongoing resolve and capacity to bringing outstanding theatre to audiences throughout Ireland”.

Hynes has been committed to staging big productions in small and often remote settings, ever since she brought Druid’s interpretation of JM Synge’s Playboy of the Western World to two of the three Aran islands in 1982.

She has staged Martin McDonagh’s work as far south as Co Cork’s Cape Clear Island and as far north as Co Donegal’s Arranmore.

The company’s DruidSynge trilogy of plays was performed outdoors on Inis Meáín in 2005, while last year, the DruidShakespeare trilogy took its peat moss set to Kilkenny Castle’s yard.

In 2011, former president Mary McAleese attended a production of McDonagh’s The Cripple of Inis Meáin on the titular island.

The company said the outdoor performances on Inis Meáin on July 25th and 26th, at the Céide fields on July 28th and on the Military Road on July 30th represent a “meditation of sorts on Beckett and what it means to be Irish”.