Okay, so the apocalypse is here. Dog-food sandwich, anyone?

Don’t panic: survival specialist Lewis Dartnell has written a handy guide to surviving the end of the world as we know it and ‘rebooting’ the planet. It’ll be grand 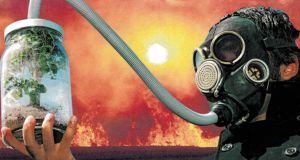 Apocalyse soon? ‘The resurgence of post-apocalyptic fiction is partly because the general public is getting that message that things are going to get worse before they get better.’ Photograph: Getty Images 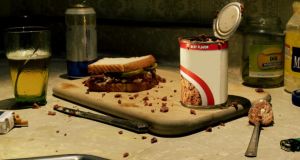 ‘A single average-sized supermarket should be able to sustain [a single person] for around 55 years – 63 if you eat the canned cat and dog food as well,’ Dartnell writes in his book 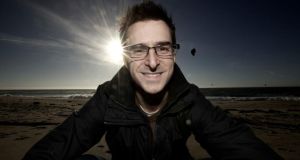 Lewis Dartnell: author of ‘The Knowledge: How to Rebuild Our World from Scratch’

Nuclear disaster, climate change, rampant disease, asteroid strikes, zombie outbreaks, nationalised healthcare, angry deities – these are just some of the ways civilisation collapses in films and books, after which hollow-eyed survivors pick their way through the ruins and envy the dead.

As a fan of science fiction, I have long recognised my shortcomings when it comes to surviving even the slightest glitch in civilisation’s services. I find power cuts terrifying. I have panic attacks when my car breaks down. I even get upset when my phone drops out during my interview with post-apocalyptic survival specialist and UK Space Agency research fellow Lewis Dartnell.

“I don’t know what happened there,” says Dartnell when he gets back on the line. There’ll be no mobile phones after the apocalypse, I think sadly.

Before reading Dartnell’s book The Knowledge: How to Rebuild Our World from Scratch , I had one simple post-apocalyptic survival scenario. I would become a bard for a local thug/strongman. “I’ll follow him around writing songs about how great he is while he does terrible things,” I explain to Dartnell. “And in return he’ll protect me.”

“Hmm,” says Dartnell. “I’m not sure that would work. You’d need pretty tough friends . . . with shotguns.”

Dartnell’s book that provides some alternative suggestions. In The Knowledge , he condenses the essence of civilisation into sections on agriculture, metallurgy, communication, electricity generation and clothing production. Each is replete with tips and illustrations and fascinating factoids. “A single average-sized supermarket should be able to sustain [a single person] for around 55 years – 63 if you eat the canned cat and dog food as well,” he writes.

High level of anxiety
Dartnell says that everyone should buy multiple copies of The Knowledge , put them in tin boxes and bury them in their back gardens. He’s joking, but as someone with no practical skills and a high level of anxiety, I’m considering doing it anyway.

“It’s just one of these things that everyone mulls over in the back of their brain,” says Dartnell. “What would happen if civilisation collapsed? What could I do for myself? Who would be on my post-apocalyptic survival team? There are people, doctors, nurses, who have practical skills that would have a true value in the new world order, unlike, without being rude, journalists or advertising executives or people like myself.”

There is a precedent for what Dartnell is trying to do. In The Knowledge he references James Lovelock’s suggestion that society needs “a primer on science”, an exhaustive account of scientific progress that could be used to reboot a down -at-heel civilisation. But the idea is older than that.

“The early encyclopaedia compilers genuinely thought they were compiling and preserving the sum total of crucial knowledge known to humanity at the time: vast volumes, catalogues of facts, the theories of how things work,” says Dartnell. “And it’s as much about using your hands as remembering equations, so they also had these very intricate, detailed diagrams and drawings of what your hand had to do when creating a fishermen’s net or smelting metal.”

They really thought like that? “They specifically thought about preserving knowledge in case of a catastrophe that would send the globe back into darkness,” he says. “The first encyclopaedia compilers were very conscious of this idea that the modern world could be fragile, that it wasn’t very resilient and it wouldn’t take much for it to collapse in the same way that Roman civilisation collapsed.”

“Most civilisations that have arisen in the past have collapsed,” he continues. “They wiped each other out through war or a collapse of agriculture or because of climate change. If anything, because our civilisation today is so interlinked and everything relies on everything else and it’s such an intricate system, we’re more rather than less vulnerable.”

He breezily explains how quickly a fuel crisis would lead to empty shops and people going hungry (the UK population has, the book says, 11.8 days of stored non-perishable food). “And because there’s no petrol left, you can’t purify the drinking water any more either,” he adds chirpily. “Everything is interlinked.”


He’s fascinated by how disconnected modern westerners are from the products they consume. “I wanted to understand the quintessence of civilisation and what

underlies our day-to-day existence,” he says. “I think people in the developed world don’t have the faintest idea. The food I’m eating right now [he’s in a London cafe as we talk over the phone]: where does it come from, where is it made? How would I make it myself if I had to? How would I make clothes for myself so as not to freeze to death? The things in my pocket now – a whole diversity of different materials, of metals and plastics and glass substances, how would I make those for myself if I needed to?”

He wants to turn this into a full-on discussion about civilisation. He has started a website, the-knowledge.org, where people can continue the conversation. But the internet wouldn’t survive the coming cataclysm, right? “The great irony is that the internet was originally created to survive the apocalypse,” he says. “It was a distributed network so that after nuclear missiles wiped out cities or power stations, enough communication capability would stick around. But when the power grid goes down, then Google servers and networks would disappear like everything else.”

All knowledge could very quickly disappear. He evokes the Library of Alexandria, destroyed by fire in the third century along with hundreds of years of classical knowledge. “A massive amount of ancient knowledge that could have been preserved was lost,” he says. “What might have happened if Greek and Roman civilisation had taken steps to preserve their knowledge in a few locations? Could they have prevented the Dark Ages and not lost 700 years of European history scrambling around in the mud?”


Ignorance of science
He worries that our civilisation has lost respect for the sciences. “If you’re at a dinner party and say you don’t know the third law of thermodynamics, you don’t get laughed off the table but if you haven’t read Shakespeare or couldn’t talk about a Constable painting you’d be considered a complete oaf,” he says. He references CP Snow’s 1959 Two Cultures lecture, in which Snow bemoaned the growing gulf between science and the arts.

Science fiction, of course, is a blend of art and science and provided the inspiration for Dartnell’s book. His favourite post-apocalyptic novels include Nevil Shute’s On the Beach , John Wyndham’s The Day of the Triffids and Walter M Miller’s A Canticle For Leibowitz .

“Science fiction isn’t really about the future: it’s about what’s happening to us today,” he says. “I think the resurgence of post-apocalyptic fiction is partly because the general public is getting that message that over the next few years we have to sort out global warming and that things are going to get worse before they get better. It’s starting to filter down into the collective unconscious.

“You can give people a very direct recipe for making glass or soap but you can’t give people guidelines on post-apocalyptic psychology. It would read like the most ludicrous self-help book.”

“ The Power of Positive Thinking When Everyone You Know Is Dead ?” I suggest.

“ How to Survive the Apocalypse and Influence People ,” says Dartnell. “I genuinely think this is crucial information you would want to preserve to help a civilisation get up and going after a collapse.”

As part of the UK Space Agency, does he know something we don’t? “There’s nothing in particular on the horizon you’d want to be concerned about,” he says, before pausing to reflect. “Although we are running out of oil, and we’re damaging our climate in a global sense. But it’s not like there’s an asteroid coming.” There’s silence over the phone for a moment. “As far as we know.”


The Knowledge: How to Rebuild Our World from Scratch is out now on Bodley Head. More information at the-knowledge.org (for as long as the internet lasts)