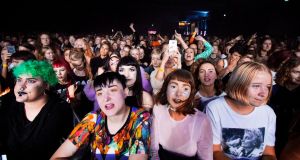 A Swedish event billed as “the world’s first major music festival for women, non-binary and transgender only” has been found in breach by Sweden’s discrimination ombudsman.

The inaugural Statement festival was held in Gothenburg in August following a successful crowdfunding campaign that raised 533,120SEK (€51,520). The ombudsman opened an investigation into the festival in July.

A new ruling said that although festival organisers did not enforce the “man-free” rule, since “no differentiation based on sex was made between visitors at entry”, the statements the company issued prior to the event “discouraged a certain group from attending the event”, breaching a law banning gender discrimination.

The ombudsman found that nobody suffered damage from the festival’s restrictions and no penalties will be imposed.

The organisers of Statement responded on Facebook: “It’s sad that what 5,000 women, non-binaries and transgender experienced as a life-changing festival made a few cis men lose it completely. The success of the Statement festival shows that is exactly what we need and the DO’s verdict doesn’t change this fact. Otherwise, we have no comments. We are busy changing the world.”

The ombusdman’s press officer, Class Lundstedt said: “It is important to point out what an infringement is. These [infringements relate to] statements made before the festival, that they wrote on their website. Still, we haven’t been able to prove that someone would have been discriminated against in connection with the implementation or that someone would have been rejected.”

“Clearly, we believe that sexual abuse, especially at festivals, is a serious problem. So we are looking forward to trying to correct this,” said Lundstedt. “However, it shouldn’t happen in a way that violates the law, which their statements in the media and their website [did].”

Organisers described Statement as “a safe space for the people who want to attend a festival without feeling scared for their personal safety”, and said it would remain a protected space “until ALL men learn how to behave themselves”. – Guardian