What? . . . Wow: not much new about David Lang’s festival of minimalism 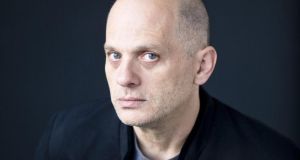 For two days last weekend the National Concert Hall was taken over by What? . . . Wow, David Lang’s Festival of Music 2015. Lang is the Los Angeles-born, New York-resident, Pulitzer Prize-winning composer who, with his friends and fellow composers Julia Wolfe and Michael Gordon, ran the first Bang on a Can marathon concert in New York in 1987.

Out of the marathon grew an ensemble (the Ban on a Can All-Stars), a publishing arm (Red Poppy Music), a record label (Cantaloupe) and many other ventures to create what the Bang on a Can website describes as “a giant international organisation dedicated to the support of experimental music, wherever we would find it”.

Bang on a Can and its trio of composers have moved from the margins to become about as mainstream as you can get in the classical world. They wield a power and influence that puts them at the heart of the establishment, however little they might like to see themselves that way.

Their influence in Ireland has been considerable, not least through Crash Ensemble, which was established in 1997. The group’s very name tells a lot. It shares with Bang on a Can a focus on amplified music and an interest in the sound world and sound levels of rock music, and its primary orientation is towards work that comes from the far side of the Atlantic. It didn’t take Crash that long to eclipse its rivals as the major beneficiary of Arts Council funding directed towards the performance of new music.

In spite of its novel and quirky title, the weekend’s David Lang festival was neither a one-off nor a new event. It was the third iteration of the New Music Dublin Festival, a five-year collaborative project between the Arts Council, RTÉ orchestras, the National Concert Hall and the Contemporary Music Centre.

New Music Dublin originally offered itself as “a major festival of contemporary music” that was intended to give voice “to a broad range of musical creativity from our time by showcasing the work of major international and Irish figures to the public, and through the involvement of many Irish artists”.

Why the festival turned to the US for a curator is beyond me. There is a long list of American composers who have had extensive exposure in Ireland. The classic trio of minimalists – Terry Riley, Steve Reich and Philip Glass – have all been here in person. Reich has had two festivals built around his work and John Adams was the featured composer of the 2007 RTÉ Living Music Festival. Pauline Oliveros, Robert Ashley, Alvin Lucier, Tom Johnson, Meredith Monk and John Zorn have all appeared in Ireland, most of them also performing their own work, and Crash took over the Temple Bar Gallery in 2008 for a four-storey evening of heavy-duty immersion in the sounds and videos of Phill Niblock. Exposure for the minimalists and experimentalists of American music has been far greater than that accorded to their European counterparts.

The line-up of Lang’s festival featured composers with an average age of 54 and a range of works with an average year of composition around 2000. What’s new about that? To be fair to Lang, the purpose of the festival notwithstanding, his declared rationale had nothing to do with new or contemporary music. His aim was to trace the history of the music that has grown out of minimalism in the area of Manhattan in which he lives. So at one end he gave us Steve Reich’s Music for 18 Musicians and Tom Johnson’s Nine Bells, both from the 1970s, and at the other a clutch of recent and new pieces by himself, Julia Wolfe, Michael Gordon, John Luther Adams, Bryce Dessner, and Irish composers Garrett Sholdice, Seán Clancy, Irene Buckley and Linda Buckley.

His programming set me thinking about what might have been heard at a new music festival in 1915 or 1815, and whether anyone in those previous centuries would have reached back the way Lang did.

That said, of the four seriously long (40-70 minutes), new-to-Dublin works he included, the earliest was the most interesting. The original vision of Tom Johnson’s Nine Bells (1979) was for the instruments to be suspended from the ceiling 6ft apart from each other, on a three-by-three grid, and rung in a predetermined order by a percussionist striding beneath them. It’s a work of overlapping patterns, the sound of the performer’s footsteps (on what has been calculated to be an almost three-mile journey), the slower rhythm of the striking of the bells, the shapes created by the actual walking, the ordering of the pitches of the bells, and the sounds of the bells in the space (two of the nine bells are intended to be identical).

German percussionist Olaf Pyras’s performance was given in the tiered galleries of the old UCD medical library. He uses metal sheets suspended from supports anchored to the ground, and walks barefoot on a base of sand, highlighting the sound of the bells over the sound of the walking, which was such a feature of the composer’s own performances. It is Johnson’s genius to have turned such a genuinely minimal idea into such an absorbing musical experience.

The slow susurrations and surges of John Luther Adams’s Pulitzer Prize-winning Become Ocean (from the RTÉ NSO under Jamie Phillips); the rib-cage-vibrating clangour of Michael Gordon’s Amplified (with a Dublin Guitar Quartet so loud that I left); and Julia Wolfe’s Steel Hammer (Trio Mediaeval with the Bang on a Can All-Stars), which is a treatment of the John Henry legend, all seemed to be trying to wring out more than their musical material could bear. Lang’s own percussion concerto, Man Made (So Percussion with the NSO), with the soloists breaking twigs and playing wine bottles, had theatricality and some ear-tickling sounds, but not much substance. Has this style now reached a dead end?

The new and recent Irish music was less ambitious in scale and may well have benefited from being heard in the context of so much that was overblown.