And all change at the Abbey and Gate – our rigid cultural venues are, at last, mixing it up 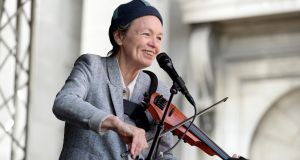 Audiences are not a fixed entity, and neither are cultural institutions nor venues. Adapt or die, and all that. As a teenager, I sang in choirs at the National Concert Hall on multiple occasions, yet for most of my adult life, the NCH felt stuffy and boring, with audiences served up slabs of music everyone had heard a million times before yet still managed to feel elitist about attending because it was in the National Concert Hall, darling. In recent years, that has changed.

The best concerts I’ve seen in the NCH over the past few years have little to do with the “classics” – James Vincent McMorrow after the release of his second album, Post-Tropical; The Gloaming’s remarkable shows in the aftermath of the release of their debut album; and Young Blood: The Beats and Voice of Our Generation at this year’s St Patrick’s Festival. I wrote about that last gig for this paper, and hung out at the venue a few weeks before the concert with some of the young performers who were taking part. Three of them, the band Hare Squead, used to skateboard nearby but had never been inside. When they pried open one of the balcony doors as an orchestra was rehearsing, they gasped at the hall.

The opening up of spaces and audiences and programmes is a good thing, so long as it’s not screwed up, of course

The Young Blood gig was far from sold out, but it gave an array of young performers the opportunity to stand on a prestigious stage and inspire an audience. Isn’t that what tax payers’ money should also be spent on when it comes to the arts? Basing what one person deems “what works”, or what venues in receipt of State funding “should be doing” solely on a commercial return and bums on seats is the type of thing that sees edgy art suffer and the middle-of-the-road congested.

The clue about this venue is in its name. It is the National Concert Hall, not the National Tabloid Opera Hall or the National Tribute Show Hall or the National Pensioners Concert Hall. On Monday, I went to see the third night of Laurie Anderson’s (sold out) concerts at the NCH. The crowd was as eclectic as they come, as eclectic as The Gloaming’s audience at the remarkable seven sold-out concerts they played there in March. When you see a venue draw a crowd that doesn’t all look the same, it’s doing something right. Core bases have a tendency to deplete if you keep going to their well with your bucket again and again, hoping the same type of people will keep buying tickets for the same kind of stuff. By diversifying its programming, the NCH has actually managed to do something very difficult – it has become a venue that can draw not just from its traditional base, but also from people who feel just as at home in Whelans or District 8.

There does seem to be an unstuffy shift in some of our most previously rigid cultural venues. The National Concert Hall is one. The Abbey Theatre, with its two new Scottish directors, Neil Murray and Graham McLaren, is another. Last week, I saw Tara Flynn’s Not A Funny Word, a work-in-progress that felt remarkably complete, and sold out three nights in the Peacock Theatre, the space in the basement of the Abbey that has been mostly dark in recent years. It was part of their What’s Happening Now series, works responding to contemporary events and discourse, which also includes A Whisper Anywhere Else by Jimmy Murphy about Garda whistleblowers, and Locker Room Talk by Gary McNair about sexually abusive rhetoric in the Trump era. Selina Cartmell’s new reign at The Gate is already revolutionary (for The Gate), as its new season features seven main plays with five directed by women and two written by women.

The opening up of spaces and audiences and programmes is a good thing, so long as it’s not screwed up, of course. To ensure success, you need leaders with vision who are connected to the broader, global creative world and to a diverse audience. A venue devoid of risk is a boring one. A cultural institution that refuses to stray from its well-trod path will run out of road. Equally, a space that doesn’t recognise what it does well will lose fans. But change in and of itself isn’t reckless or stupid. Repetition might make reputation, but it can also get pretty boring after a while.