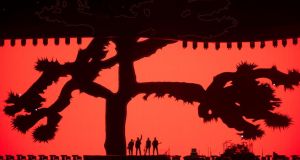 U2 kick off their Joshua Tree Tour 2017 in Vancouver on Friday. Photograph: Jonathan Hayward/Canadian Press/AP

U2 is the top-selling live music act in the US for summer 2017, ticket seller StubHub said.

The band has outpaced pop acts such as Ed Sheeran and Lady Gaga with a concert tour celebrating its 1987 album The Joshua Tree.

U2’s 13-stop Joshua Tree Tour 2017 topped the list of most popular live music acts in the US between Memorial Day (May 29th) and Labour Day (September 4th).

British singer Sheeran’s US leg of his Divide tour came in at number two with 32 shows over the summer.

Unlike most artists who tour in support of new albums, U2’s concerts celebrate the 30th anniversary of the release of The Joshua Tree, with lyrics that drew from the band’s travels across the US, along with social commentary.

U2 kick off the tour on Sunday at Seattle’s 68,000-capacity CenturyLink Field and then play shows across the country, including in California, Texas and Florida, before heading to Europe.

StubHub, which did not release the number of tickets sold, said U2 had outsold Sheeran by 65 per cent and outsold last year’s top summer act, British singer Adele, by 15 per cent.

Tickets for U2 have averaged about $246 (€225), while average ticket prices for Sheeran have been about $231, the ticket seller said. It added U2’s June 3rd Chicago date was the most in-demand concert of the summer.

StubHub’s top-10 acts of the summer saw an equal division of veteran artists and current pop and hip-hop acts, with Tom Petty and the Heartbreakers, Metallica, Tool and Roger Waters among the veterans and Bruno Mars, Lady Gaga, Kendrick Lamar and Justin Bieber among the latter. – (Reuters)